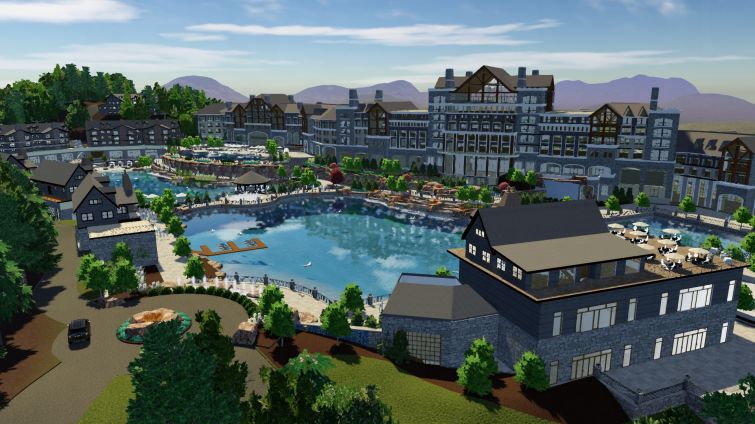 A Nashville, Tenn.-based developer is seeking financing to propel a $524 million luxury resort near Great Smokey Mountains National Park in eastern Tennessee, according to Colliers International advisors who are working on the deal.

The firm, New Paradigm Development Partners, is looking for a mix of joint-venture equity and debt to fund development and construction of a sprawling resort in Pigeon Forge, Tenn., about 25 miles southeast of Knoxville. The project, called Blue Mist Mountain Resort, would include more than 500 rentable units, including 307 hotel rooms, 200 townhouses and 40 four-bedroom standalone lodgings.

The development — which, if financing is secured smoothly, could be finished between two and two-and-a-half years from now — will also include a half-mile-long strip of retail stores that will comprise 60,000 square feet of commercial space.

Jeffrey Donnelly, a Colliers executive who’s working on New Paradigm’s behalf, touted the project as a first-of-its-kind lodging near the 522,000-acre national park, which attracts tens of millions of guests annually for hiking and fishing in a protected area of the Blue Ridge Mountains.

“This has traditionally been a drive-to market because of the dearth of good options for longer term stays,” Donnelly said. New Paradigm “is entering the market with a solid 4-star property that will immediately set a new bar for the entire valley without going overboard,” he added.

Under the proposed development plan, the property’s dozens of buildings would scatter across 188 acres rising on a hilltop above Wears Valley Road, a few miles west of Pigeon Forge’s most developed tourist stretch. The hotel building and the retail strip would partially encircle a five-acre lagoon, complete with an artificial beach, where guests could swim, kayak or windsurf. (Crystal Lagoons, a Chilean company with U.S. operations based in Miami, has already signed on to develop the property’s water features.) Budgets for the property call for at least nine on-site dining outlets, including a “signature restaurant” in the hotel and several more as part of the retail strip.

The project also includes construction of an on-site hilltop whiskey distillery, which guests will be able to reach via an aerial gondola.

Dmitry Levkov, another Colliers broker working on the deal, acknowledged that, for different reasons, tracking down equity and debt for the project could be an ambitious undertaking.

“For the JV equity part, we’re looking for someone with tremendous experience investing in destination resorts,” Levkov said. (He acknowledged that New Paradigm has little experience in the hospitality sector, but the company has developed vast retail centers in the Midwest.) “And on the lending side, the check is going to be quite large,” he added.

Potential partners “have to have a vision for this,” Levkov said.

New Paradigm bought most of the land for the project in 2007, but the project was delayed during the economic downturn that hit a year later. The company bought more adjacent land in 2015 as its plans grew in scope It described the project as “nearly shovel ready” and said that it could be built in 24 months.

“Our goal is a national landmark facility recognized by everyone as the ultimate luxury resort experience in the Great Smokey Mountains,” Scott Lucas, a founder of New Paradigm, said in a statement.

In addition to the nearby national park, guests also go to Pigeon Forge to visit Dollywood, a theme park and retail center partially owned by singer Dolly Parton.