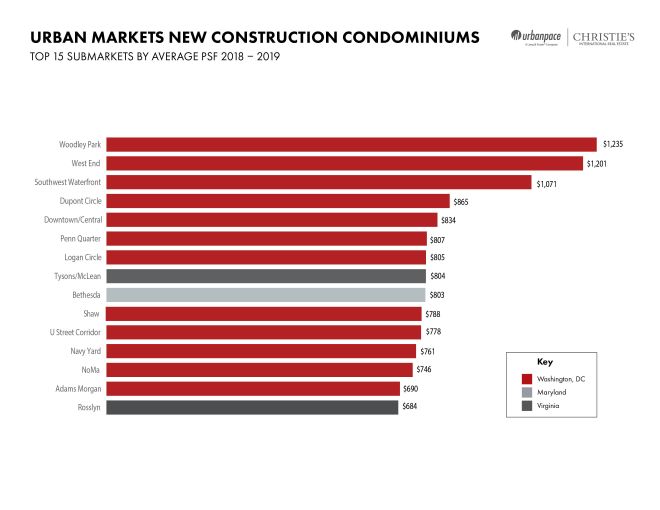 Sales of new construction condominium projects within D.C.’s urban markets recorded numbers 30 percent higher in the first six months of 2019 compared to the same period last year, according to a mid-year condo report from Urban Pace, a provider of real estate services including marketing, sales, leasing and advisory in the Mid-Atlantic.

The report, which tracks more than 100 units in their 24 month pipeline in the Washington region, notes that 856 units traded hands in the first six months of the year, up from 660 in the first half of 2018. It also revealed that eight out of the top 10 best-performing condo submarkets in the region on a price-per-square-foot basis were in Washington.

Additionally, the report showed an increase in inventory of large-scale projects at the start of this year, which elicited a positive market response and provided more options for first-time homebuyers.

“The demand for appropriately sized condominiums is strong in the region,” Clint Mann, Urban Pace’s president, told Commercial Observer. “We have such a strong pool of mature renters that if the product and price matches their needs, they are ready to make the move into homeownership.”

Increased activity in the condo market is providing a variety of options at more affordable price points, the report said. A disproportionate amount of luxury product that delivered in late 2018 and early 2019 has skewed available inventory toward larger units. About 45 percent of the units that sold in the first half of this year were two-bedroom units.

“There is a general lack of supply in the market, which is helping to fuel new home sales,” Mann said. “Larger buildings, with appropriately sized and priced homes, are appealing to consumers and filling a void within the resale market where inventory is so limited.”

According to Mann, multifamily development had been a main focus over the last couple of years, but now interest has turned to condo developments in the Washington region.

Transitional markets continue to be an affordable option for buyers and, depending on the sophistication of the consumer, submarkets that can see the highest returns from a pure investment standpoint, the report said.

For example, in the submarket of the Capitol Riverfront, sales of new condos in the range of the $600s to low $800s per square foot averaged 8.3 sales per month in the first half of 2019, compared to the regional average of 2.9 per month.

Urban Pace continues to track condo projects with more than 100 units in its 24-month pipeline.

“We predict that more large-scale condominium projects (more than 100 units) will go into design and come to the market in 24 [to] 36 months as a result of the demonstrated sales pace for some of the best performing condominium projects in the city, which are seeing sales paces of seven [to] 11 sales per month,” Mann said.