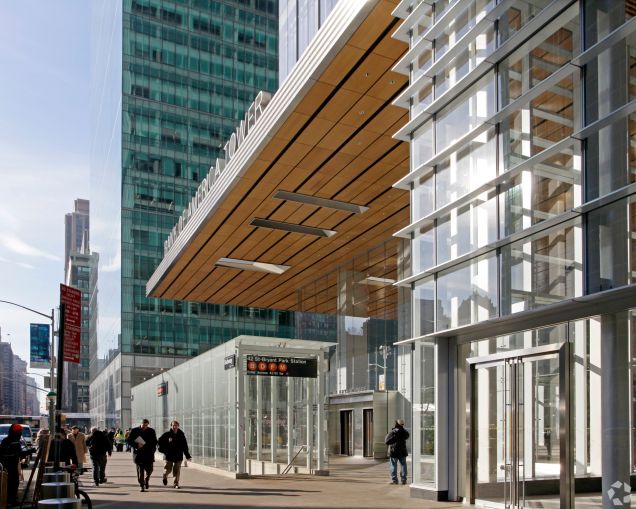 Bank of America is leading a $1.6 billion refinancing on the One Bryant Park office tower in Midtown, according to a Kroll Bond Rating Agency report.

The deal is set to close on August 21, according to KBRA. It will combine a $950 million commercial mortgage-backed securities loan from the bank with $650 million in previous public-assisted financing from 2009 on the collateral, located at the intersection of West 42nd Street and Avenue of the Americas.

The additional $300 million will go towards funding reserves and financing costs and will also allow the borrowers, Durst Organization and Bank of America, to cash out a portion of their equity. The 10-year, interest-only CMBS loan is designed around a preliminary 3.25 percent fixed interest rate — which could change by the closing date — with no principal payments due until maturity. A recent appraisal valued the Cookfox Architects-designed building at $3.5 billion, implying a relatively modest loan-to-value ratio of 45.7 percent.

The $650 million public portion of the debt falls under the Liberty Bonds program, which was inaugurated after the September 11 attacks and was meant to aid New York City’s economic recovery. The program allowed developers to issue tax-exempt bonds, a power normally reserved for municipal agencies. The bonds are supervised and approved by a public office, Empire State Development, but no government entity is on the hook for paying investors back.

Bank of America itself is the single biggest tenant at One Bryant Park, which is also known as the Bank of America Tower. That’s a slight ding against the property’s creditworthiness, according to KBRA analysts, because it means that the factors which contribute to the investment’s fortunes are less diversified than they’d be if the tenancy was more diverse. Still, 13 of the fully occupied building’s 15 tenants are unconnected with the bank. They include Akin Gump Strauss Hauer & Feld, a law firm; Marathon Asset Management; and the business offices of the Roundabout Theatre Company, a nonprofit that mounts Broadway and Off-Broadway plays. Three food-service operations have space in the building’s ground-floor retail shops: pricey fine-dining spot Aureole, a burger-and-lobster joint, and a Starbucks cafe.

Catty-corner from Bryant Park, the 51-story structure eclipses its iconic neighbor, the Grace Building, in height, with a multifaceted facade that rises to a 250-foot spire; only four New York City buildings are taller. It’s the seventh-highest in the United States and was also the first commercial high-rise recognized by the Green Building Council as LEED Platinum certified.

“We appreciate the financial market’s continuing confidence in The Durst Organization and One Bryant Park, and look forward to strengthening our relationship with our banking partners,” Lucas Durst, a Durst Organization executive, said in an emailed statement.

Bank of America and Durst’s fee interest in the building secures the mortgage: The underlying land belongs to Empire State Development, which ground-leased the tower to the two sponsors in a 99-year deal that dates to 2004. Last year, the sponsors took in $132.7 million in net operating income, a comfortable 2.52 ratio over the annual debt service they’ll be responsible for under the new financing deal. The Bank of America operating entity that leases space in the building pays itself and Durst $97.3 million per year to use the space — about 64 percent of the total rent the building earns.

CoStar Group first indicated this week that the financing was in the works, citing Securities and Exchange Commission filings.

Just last week, Starwood Property Trust came to market with a collateralized loan obligation deal that included a financing on another Bank of America-linked skyscraper: the Bank of America Center in Houston. In that deal, sponsor M-M Properties picked up a $242 million refi on the 56-story tower, which is also ground-leased.

A representative for Bank of America didn’t immediately get back to Commercial Observer for comment.