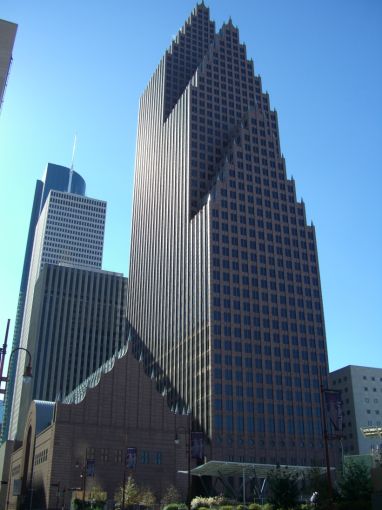 Starwood Property Trust has provided a $242 million senior loan to M-M Properties to refinance the Bank of America Center in Downtown Houston, a pre-sale report by analysts at Moody’s Investors Service shows.

A $96 million pari passu portion of the debt has been contributed to Starwood’s STWD 2019-FL1 collateralized loan obligation deal. The two-year debt carries a rate of 3.2 percent over one-month LIBOR and includes four, one-year extension options.

The loan is secured by the fee simple interest in the Bank of America Center at 700 Louisiana Street — a 1.3-million-square-foot office building — as well as a 966-space parking garage at 600 Prairie Street, which sits two blocks north of the tower.

Formerly known as the NationsBank Center, the high-rise asset at 700 Louisiana Street was completed in 1983 and comprises a 56-story office tower plus an adjacent 12-story banking hall. Designed by Johnson/Burgee Architects, the property also includes below-grade retail space, storage room and 314 parking spaces.

Bank of America currently leases 168,310 square feet at the banking hall and will vacate upon lease expiration in September 2019. The bank is currently consolidating three of its Houston offices to Skanska’s 35-story tower at 800 Capitol Street.

Starwood’s loan is structured with $20 million in future funding, plus a tenant improvement reserve of $9.2 million due to ongoing renovations and rolling leases at the building — including the Bank of America departure.

As reported by the Houston Chronicle, M-M Properties hired Sydness Architects to reimagine the Western Union building that was incorporated into the building’s design at the time of construction rather than attempting to move it.

Once the Western Union renovation is complete and Bank of America vacates the banking hall, second and third floor mezzanine office space will be constructed, and a coffee concept will be added to the ground floor, totaling 37,000 square feet of rentable space.

M-M Properties acquired the asset in August 2007 and had some repositioning to do back then due to deferred maintenance at the property. The investment firm’s website describes the building as the “most distinctive building on the Houston skyline with the most recognizable image.”