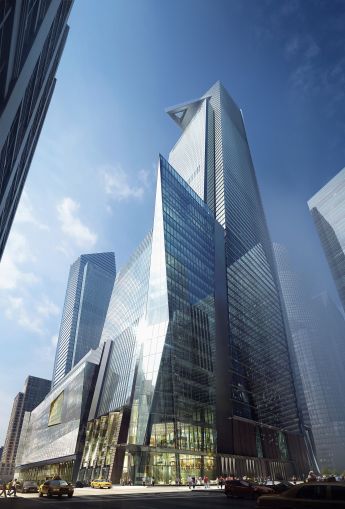 Related Companies and Allianz’s $2.2 billion acquisition of a gigantic office condominium at 30 Hudson Yards was funded in part with a $1.43 billion CMBS loan from Deutsche Bank, Wells Fargo and Goldman Sachs, according to Fitch Ratings, which analyzed the massive debt deal.

The transaction involves Allianz buying a 49 percent equity stake in the office condominium, which spans 26 floors of the 90-story skyscraper, as Reuters previously reported. WarnerMedia, an AT&T subsidiary, had controlled the office space but sold it back to Related, along with minority partner Allianz, in a sale-leaseback arrangement.

On top of the CMBS debt, the two buyers are contributing a total of $782 million in equity, for a loan-to-value ratio of about 65 percent. The debt comprises $1.12 billion in senior notes and $310 million in a junior tranche. The Related-Allianz joint-venture will pay interest of 3.35 percent on the 10-year loan, with no principal payments due until maturity in 2029.

WarnerMedia, the parent company of Warner Bros., CNN, HBO, Cinemax and a variety of regional sports networks, has a 15-year lease for its 1-million-square-foot footprint in the building, where it pays $75 per square foot.

Cushman & Wakefield represented Related in the debt deal, and also advised WarnerMedia on its side of the sale-leaseback deal. Steve Kohn, Rob Rubano, Alex Hernandez and Brian Share found the debt for Related, while Doug Harmon, Adam Spies and Kevin Donner advised WarnerMedia.

The building, at the corner of Tenth Avenue and West 33rd Street, also hosts Wells Fargo, Norwegian financial group DNB and Arosa Capital Management as tenants. KKR owns its own 343,000-square-foot office condominium in the tower as well, and earlier this month, it picked up a $490 million refinancing from Deutsche Bank against its equity in that portion of the building.

Designed by Kohn Pedersen Fox, the 1,268-foot tower opened in mid-March and boasts the western hemisphere’s highest observation deck. The Shops & Restaurants at Hudson Yards, a nearly 700,000-square-foot high-end mall, connects the tower to 10 Hudson Yards next door. WarnerMedia spent $700 million to fit out its office condominium in the tower, and its employees have a private entrance to the building on West 33rd Street.

WarnerMedia plans to use its space as the global headquarters for CNN, HBO, Warner Bros. and Tru TV. Amenities on its floors include a cafeteria, a fitness center, a two-level auditorium and cinema and an outdoor deck.

Related and Allianz can expect to earn $146 million annually from WarnerMedia’s tenancy in the office condo, against predicted yearly expenses of $106.8 million, according to Fitch.

Representatives for Related and Allianz did not immediately respond to inquiries. A Deutsche Bank spokesman declined to comment.