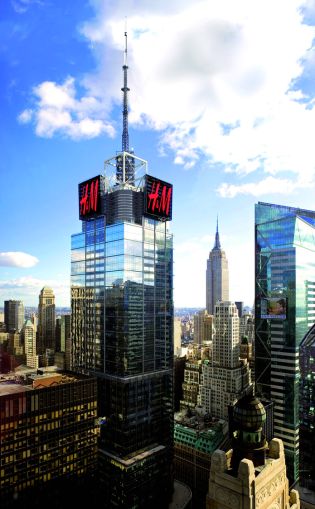 Vevo is extending its commitment to Midtown.

The music video platform, best known for its partnership with YouTube, has signed a five-year lease for 37,768 square feet at the Durst Organization’s 4 Times Square, also known as 151 West 42nd Street.

The media company has been subletting the space, located on the 25th floor of the 48-story building, from law firm Skadden, Arps, Slate, Meagher & Flom for the past seven years.

Also at the building, National Cable Communications has added 16,724 square feet to a 65,000-square-foot deal it signed earlier this year, and will now occupy the eleventh and twelfth floors. The 11-year lease will end at the same time as the previously signed deal.

The tower was formerly known as the Condé Nast tower, for its famed anchor tenant, which moved to 1 World Trade Center in 2014. The tower’s second largest tenant, Skadden Arps is scheduled to exit in 2020 for One Manhattan West. Together, the two companies leased more than 1.4 million square feet at the 1.8 million-square-foot tower.

Durst has invested $140 million in a capital improvement program for the building in the wake of Condé Nast’s departure, and refinanced the building with a $900 million loan from J.P. Morgan Chase and Wells Fargo in April, as Commercial Observer reported at the time.