Commercial Real Estate Is Trying to Be More Inclusive, But Still Has a Ways to Go 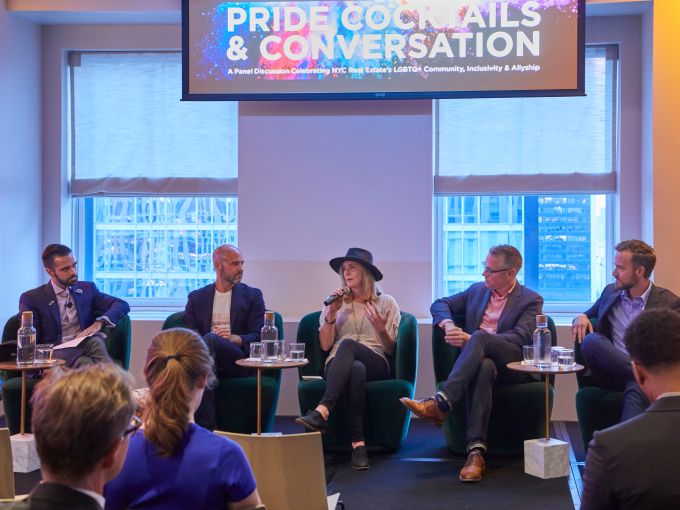 At the beginning of RXR Realty’s pride panel at 75 Rockefeller Plaza, the moderator, RXR’s Justin LaCoursiere, pointed out that the commercial real estate industry still has a glaring lack of representation from people of color, members of the LGBTQ community, and women.

The issue is one that still rarely gets discussed at commercial real estate events, which still tend to be overwhelmingly white and male. Even that night’s panel—made up of LGBTQ real estate pros and held at at a Convene coworking space on the 31st floor—lacked people of color, he noted. The panelists agreed, and settled in for an hour-long discussion of how to make the industry more inclusive and welcoming.

Sam Lee, a senior vice president in charge of growth at WeWork, explained that he emails 1,300 employees at the beginning of each year and offers to mentor them. Most of the mentees who come forward, he said, are women, people of color and LGBTQ people.

“So the charge to every single employee was if you take some amount of time, I sent them a framework to think about your mission, your values and your goals,” Lee noted. “I will sit down with you for at least an hour and help you be a sounding board and help you work through to the next stage. And I’ve done now 150 of these hour-long presentations in the last six months.”

The coworking giant also tries to create a positive environment by encouraging all of its employees to be their authentic selves, Lee explained.

“One of the values that inspires me about WeWork and has since day one was the value authenticity,” he said. “And that’s not something that we just celebrated this month. It’s really something that we expect and require every single day.” He added that authenticity is part of “our interviews, our learning development management and our promotion process. It’s really considered at every single stage.”

Charles McClellan, the senior director of technology at Cushman & Wakefield, helped build his company’s employee resource group (ERG) for LGBTQ workers, dubbed UNITY, from the ground up. A year in, UNITY is hosting lunch-and-learn events, happy hours and marching in six different parades around the country.

All of the panelists agreed that ERGs were often the best way for under-represented workers to advocate for themselves on the corporate level. Taryn Miller-Stevens, the vice president of community and programming at Convene, offered herself and the fellow panelists as a resource to employers looking to build ERGs.

Another important factor is encouraging employees and corporate leadership to get to know people who are different from them.

At a meeting about inclusion, Miller-Stevens said she was recently faced with a question: Who are you spending 15 minutes a day talking to, who is not in your current ecosystem? “So we get a really tangible way to build allies across the workplace and in the world,” she said. “[It’s] to build relationships with people who don’t look like you and don’t come from your background.”

The panel also discussed the commercialization of pride. “Just about every corporate entity these days will slap a rainbow flag on any product that they make,” said Josh Meltzer, the head of northeast public policy at Airbnb. “And it’s easy to become very cynical about that as we walk around Target seeing a rainbow flag on all shampoo. Like, alright, you’re obviously leveraging the moment for your own benefit.”

He noted that, a decade ago, it was difficult to get businesses to sign on to supporting gay marriage in New York. “So the fact that we’re now at a place where everybody wants to wrap themselves in a rainbow flag is progress,” he said. “Is it enough? No. But that we can say, ‘This is the floor, and we appreciate that everyone is now acknowledging and embracing [these] communities.’ That’s great. But there’s so much more to be done.”

He added that getting involved with organizations like the Human Rights Campaign, a major LGTBQ advocacy group, “is a really big and important statement that you can make as a company and as a corporate entity.”