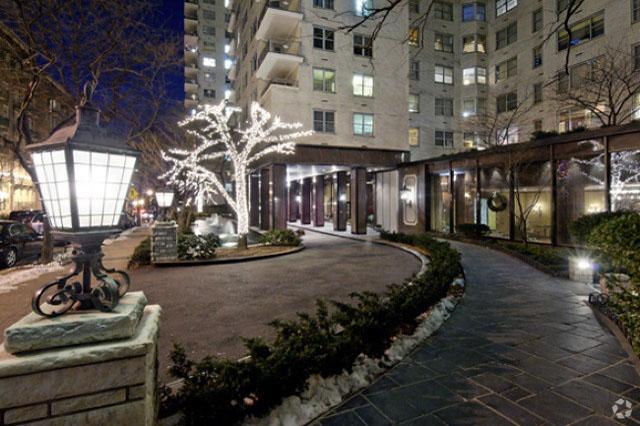 Glenwood Management has picked up a $123 million refinancing on a residential rental building it owns on the Upper East Side, according to New York City property records.

The deal re-ups Glenwood’s leverage on The Pavilion, a hulking property at 500 East 77th Street, on the block east of York Avenue. (It’s bounded on the other side by Cherokee Place, a path that runs through John Jay Park.) The debt package, from Principal Life Insurance, refinances a $113 million Fannie Mae mortgage from 2007 that came from Independence Community Bank, a Brooklyn-based institution which was acquired by Santander around the same time. Principal Life’s debt investment also includes an additional $10 million mortgage to bring to full debt component to $123 million.

Built in 1964, the 33-story Pavilion features four wings that rise at each corner of a bulkier central tower. Its main entrance features a private, circular drive off of East 77th Street with fountains and flora, and many of the white brick building’s 833 apartments—a mix ranging from studios to four-bedrooms—feature balconies. There’s also a fitness center and a landscaped roof deck.

This month, a two-bedroom unit rented for just shy of $7,000 per month, according to data from StreetEasy. A studio came off the market for almost $3,500.

Below street level, there’s an on-site parking garage that’s also operated by Glenwood, through an arm of the property-management company that runs 23 Manhattan parking facilities. A shopping arcade on the premises is home to retail tenants that include a grocery store and a beauty parlor.

Glenwood’s 27 New York City rental buildings are concentrated on the Upper East Side, but the firm also owns a handful of Upper West Side properties, as well as three rental towers in Lower Manhattan and an apartment building in the Riverdale section of the Bronx. One of its downtown towers, at 10 Liberty Street, built in 2002, was the first residential project to go up in the Financial District after the 9/11 attacks, according to the company’s website.

The deal’s lender and borrower have come together in Manhattan before: In December 2018, Principal gave Glenwood an $82 million refi on The Regent, a 35-story tower at 45 West 60th Street on the Upper West Side.

Representatives at both firms didn’t immediately respond to inquiries.