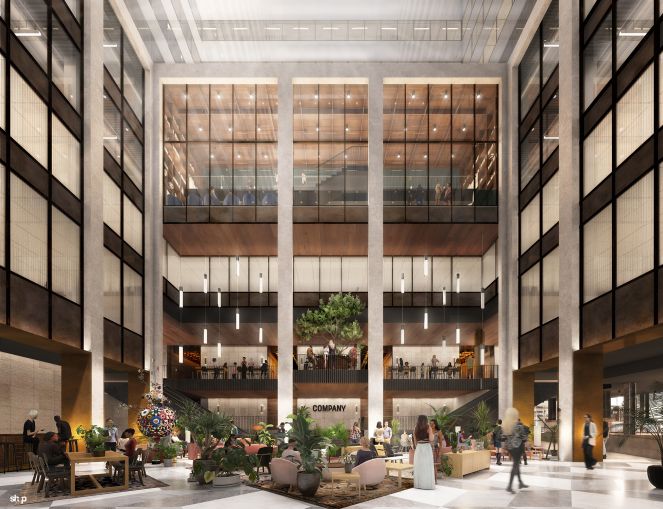 A renovation at 335 Madison Avenue is creating a new lobby with lounge seating and open areas on the second and third floors. Rendering: SHoP Architects 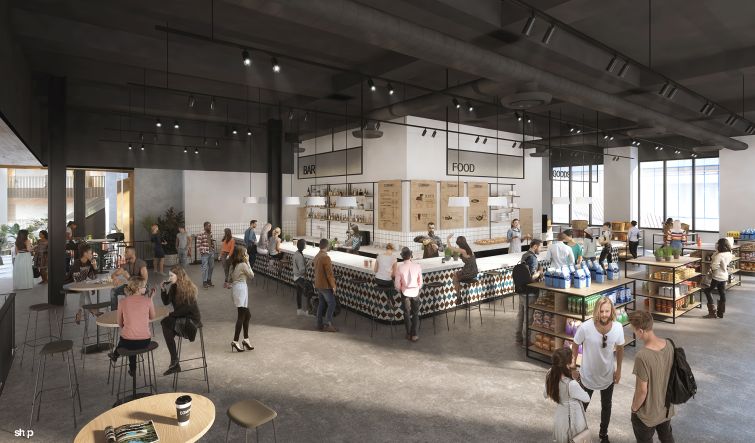 Part of the lobby work includes a new restaurant and bar with an industrial-chic vibe. Rendering: SHoP Architects 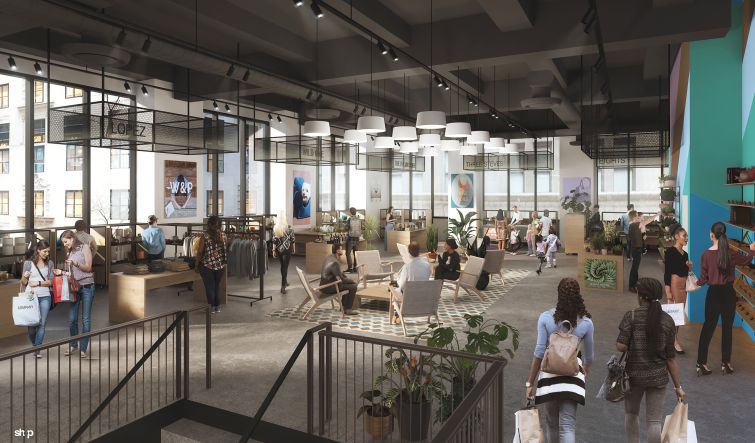 Portions of the first three floors will be converted to a "retail cooperative" with stalls for direct-to-consumer brands that don't have brick and mortar stores. Rendering: SHoP Architects 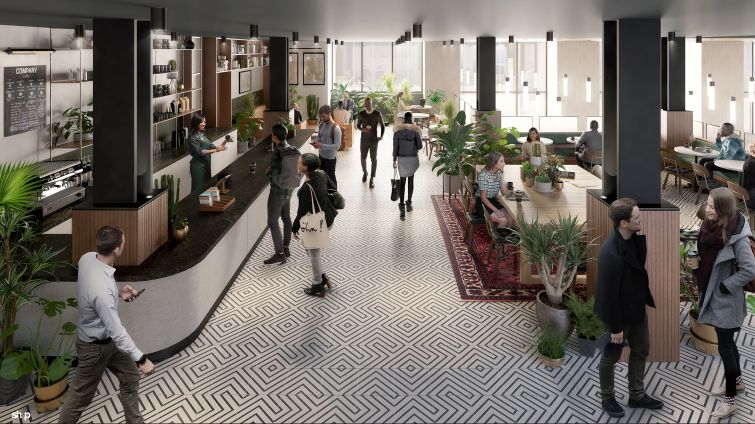 An elevated portion of the lobby will feature a coffee bar. Rendering: SHoP Architects 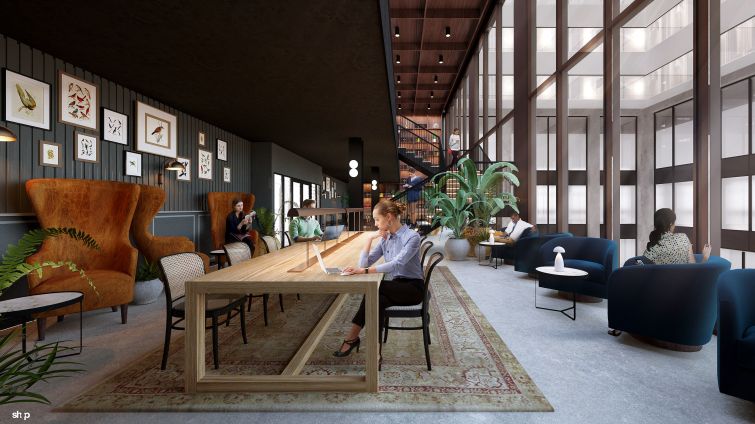 Upstairs, there will be a library-like work area with floor to ceiling bookshelves. Rendering: SHoP Architects 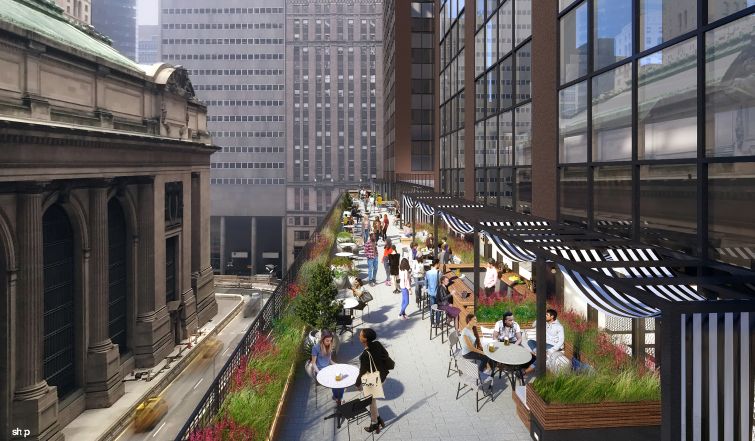 Milstein is putting in a new cafeteria for tenants, which will have a terrace overlooking the Park Avenue viaduct. Rendering: SHoP Architects 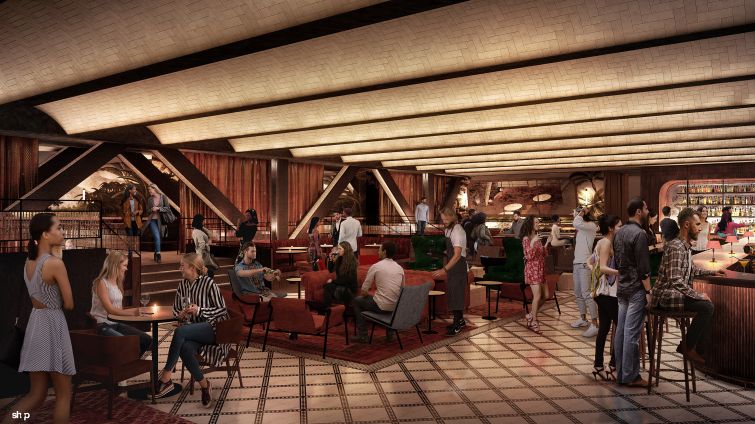 A portion of the ground floor will be turned into a speakeasy-style bar. Rendering: SHoP Architects
Previous Next

When Milstein Properties realized that more than a third of its 1.1-million-square-foot office building at 335 Madison Avenue would be vacant, it mulled what to do with the property next to Grand Central Terminal: tear it down and rebuild, or dramatically revamp the 1980s office tower?

After the city rezoned Midtown East, Milstein executives considered redeveloping the block-long property between East 43rd and East 44th Streets, watching as SL Green Realty Corp. built One Vanderbilt, one of the city’s largest new office towers, across the street. Ultimately, Michael Milstein decided to undertake a major renovation of the 29-story building, which was built on the steel skeleton of the 1913 Biltmore Hotel and features a soaring atrium. His grandfather and great-uncle, Paul and Seymour Milstein, respectively, gutted the historic hotel in 1981 to create a New York City headquarters for Bank of America, drawing the ire of preservationists who had hoped to see the building’s original interiors maintained. The property sits on top of Grand Central Terminal and is directly connected to the railroad station via a passage off the lobby.

Ironically, the renovation hopes to revive some of the Art Deco and Gilded Age decor that made the Biltmore famous in its heyday. The new version of the property will be branded “The Company Building.” The plans, designed by SHoP Architects, call for a new lobby inside the atrium with different kinds of seating, plants and a whimsical sculpture by Takashi Murakami, along with a slew of new amenities. Portions of the first six floors surrounding the atrium have been removed entirely or reclad in floor-to-ceiling windows to create unique amenity spaces that overlook the atrium. A portion of the second floor will be opened up to accommodate seating arranged around a large tree and a reception area with iPads. Parts of the fifth and sixth floors have been combined to create a double-height library and work space with dark wood floor-to-ceiling bookshelves. The ground floor will also host several 100-square-foot retail kiosks for direct-to-consumer brands that don’t have brick-and-mortar stores. It will connect to two more floors of small vendor stalls that Milstein is calling a “retail cooperative.”

Besides the main entrance in the atrium, the lobby work will also add a coffee shop, a faux-industrial restaurant and bar, and a second speakeasy-style bar inspired by Grand Central Oyster Bar, with heavy dark wood panelling on the walls and a vaulted ceiling mimicking the Gustavino tile found throughout Grand Central. In addition, the Milsteins are adding a cafeteria with a terrace that overlooks the Park Avenue viaduct and an adjoining meeting area. In the basement, the landlord is putting in a 30,000-square-foot gym with a pool, doctor’s office and locker rooms. All told, the revamp will create 150,000 square feet of retail and amenities, as part of an effort to market 400,000 square feet of vacant office space. CBRE’s Paul Amrich, Neil King, Sacha Zarba, Jeff Fischer and Meghan Allen handling the leasing. The speakeasy bar and lobby will open in the late summer and winter of 2019, respectively, and the tenant amenities will be finished in stages throughout 2020.

Ultimately, the goal is to market the building not just as offices but also as a Soho House-style membership program, where out-of-town entrepreneurs can use the coworking areas and amenities in place of a New York City office.

“We know that there’ll be a membership component to the building,” explained Damon Lopez-O’Dwyer of Milstein Properties. “Silicon Valley founders, primarily, who aren’t necessarily based in New York, when they’re here, are always looking for a good place to base themselves for the day for meetings…It wouldn’t be so much like coworking for them. They’ll have a gym that they can go to, a place where they can take meetings, [and] obviously the food and beverage program will be fantastic. So it’s sort of a marriage of work and a hotel without the actual room.”