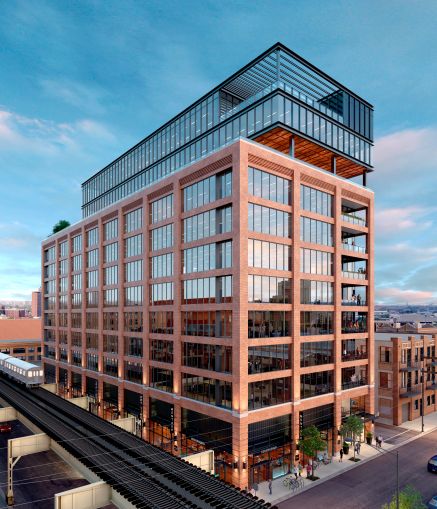 A rendering of 210 North Carpenter Street in Chicago. Image: JLL

Bank of America has handed Sterling Bay an $84 million refinancing on a newly built office tower that Google will occupy in Chicago, Commercial Observer can exclusively report.

The Chicago-based sponsor co-owns the new building, 210 North Carpenter Street, with institutional investors under the aegis of J.P. Morgan Asset Management. The 12-story, 206,000-square-foot tower, which stands in the Fulton Market neighborhood between West Lake Street and West Fulton Market, finished construction earlier this year. The debt replaces a $60.8 million financing from ULLICO that funded the building’s construction starting in August 2017.

A JLL advisory team led by Keith Largay, Brian Walsh and Patrick Healy brokered the new debt on behalf of Sterling Bay. A dog-eat-dog debt environment sent financiers into a tizzy to lend against the property, according to Largay.

“The current lending market is extremely competitive, especially for top-tier sponsors with market-leading assets,” Largay said in a statement. “The competitions for this financing was intense, enabling [the borrowers] to lower their cost of capital while providing long-term flexibility.”

In October, Google signed on to lease 132,000 square feet on seven floors in the building, almost two-thirds of its rentable area. Through the company’s presence there and its even larger lease in another Sterling Bay office building in the neighborhood, the 550,000 square feet it controls in 1KFulton at 1000 West Fulton Market, Google has single handedly made the area—a former industrial zone just west of the city’s central business district—a tech hub. In response to concerns that development would render the neighborhood unrecognizable, Chicago’s City Council in 2017 designated an approximately nine-block-by-four-block section of Fulton Market a landmarked zone where construction work must be approved by a commission.

Chicagoland construction firm Leopardo, which built 210 North Carpenter, joins Google as an early tenant at the new building, which boasts a rooftop lap pool, a fitness center and on-site parking. Other office occupiers will include S2G Ventures, a venture-capital firm, and Revolution, a marketing company. CVS Pharmacy has signed on to lease the building’s full 12,000-square-foot ground-floor retail space.

Architecture firm Solomon Cordwell Buenz did the building’s blueprints. Representatives for Sterling Bay and Bank of America did not immediately respond to inquiries.

Sterling Bay has grabbed the spotlight in Chicago with high-profile projects to transform former industrial sites in the city. Since late 2016, it has controlled the sprawling former site of the Finkl steel factory, a broad plot along a branch of the Chicago River where the company plans to build Lincoln Yards, a $5 billion, 50-acre mixed-use development.