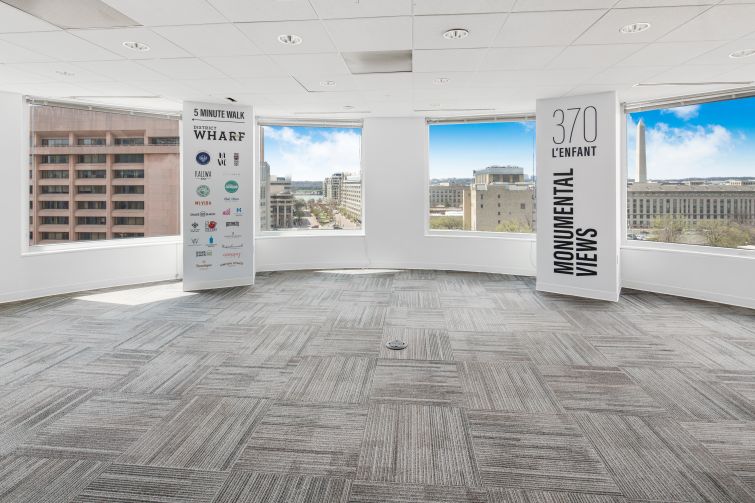 The Georgetown Company and Meadow Partners have signed on three new tenants at 370 L’Enfant Plaza SW in Washington, D.C. including Opportunity Finance Network which will take up 11,000 square feet at the 10-story building, Commercial Observer has learned.

“This move marks an exciting milestone for OFN,” Lisa Mensah, Opportunity Finance Network CEO, said in a prepared statement. “From our new headquarters in D.C., OFN will advance in our work to expand economic opportunity for people and places. Through a focus on increasing access to capital, strengthening capacity, and amplifying the voice of our growing membership network of CDFIs we will continue to make strides in helping rural, urban, and Native communities to thrive.”

Ken Pattor and Taylor Manning of JLL, who did not return Commercial Observer’s request for comment, represented Opportunity Finance Network in the deal.

Employee Benefit Research Institute signed a 10-year lease for 3,500 square feet, according to the Georgetown spokesman. The firm was represented by Nicole Miller and Demetri Koutrouvelis of Savills in the deal. The brokers could not comment by the time of publication.

The asking rent for both spaces was in the upper $40s, according to the spokesman. Bobby Schwartz, Matthew Venos and Brittany Gosnell of Cushman & Wakefield, who declined to comment, represented the landlord for all leases.

A third tenant, which declined to be named, recently signed on for 15,000 square feet at 370 L’Enfant, bringing the total square footage of new deals to approximately 30,000.

“Anchored by The Wharf and abundant nearby dining options, Southwest, and 370 L’Enfant in particular, has become an attractive alternative to the Central Business District for world-class firms seeking to attract and retain the best talent available,” Peter Armstrong, a vice president at The Georgetown Company, said in a prepared statement to CO. “These leases and the market’s enthusiastic reception to the multi-million dollar renovation program implemented by Georgetown and Meadow further validates the ongoing shift in office demand toward the Southwest submarket.”

Georgetown Company purchased the 407,000-square-foot-building in October 2017 for $126.7 million. The firm recently added spec suites totaling 10,000 square feet and upgraded the building to include modernized elevators, extensive HVAC upgrades, renovated main lobbies and elevator lobbies, upgraded bathrooms, a tenant-only gym featuring Peloton bikes and spa-quality bathrooms, according to a spokesman for the developer.

This post has been updated with a statement from Lisa Mensah.