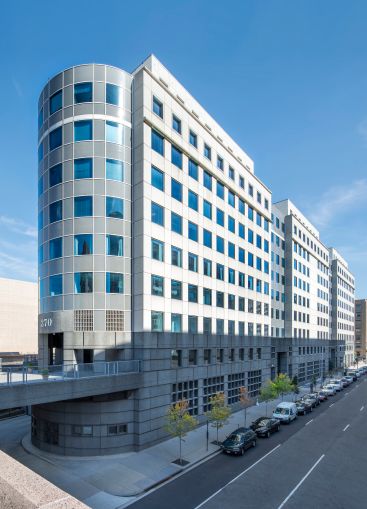 The FAA, which  has been in the building since 2011, signed a five-year renewal, a spokesman for The Georgetown Company spokesman said. The FAA did not have a broker in the deal, and Scott Johnston, Scott Killie and Howard Traul from Cushman & Wakefield represented the landlord.

“The Southwest submarket has historically been occupied primarily by government agencies and its contractors,” a C&W spokesman told CO on behalf of the brokers. “370 L’Enfant’s extension of both Accenture and the FAA proves that this foundational component of the neighborhood remains its strength.”

Accenture, a global professional services company, reduced its space to 42,000 square feet from 52,900 in July. Bobby Schwartz, Matt Venos and Brittany Gosnell from C&W represented the landlord in the deal, and Lou Christopher and Jordan Brainard of CBRE represented Accenture. The brokers declined to comment through a CBRE spokeswoman.

New York City-based Georgetown Company purchased the 407,000-square-foot-building in October 2017 for $126.7 million, the Washington Business Journal reported. The 10-story building is currently 70 percent leased, according to a spokeswoman for The Georgetown Company. She declined to cite asking rents in the building.

The C&W spokesman highlighted the building’s amenities as helping retain tenants: a new and expanded gym and locker room, in addition to updates to the lobby common areas, bathrooms and HVAC.

In January, the National Renewal Energy Laboratory (NREL) renewed its 10,000 square-foot-lease for 10 years and 10 months, per the Georgetown Company spokesman. The federal lab has been in the building since 2012. Gary Cuadros of Newmark Knight Frank represented NREL in the transaction. He did not return CO’s request for comment. JLL represented the landlord in the deal, which was CIM Group at the time of negotiations.