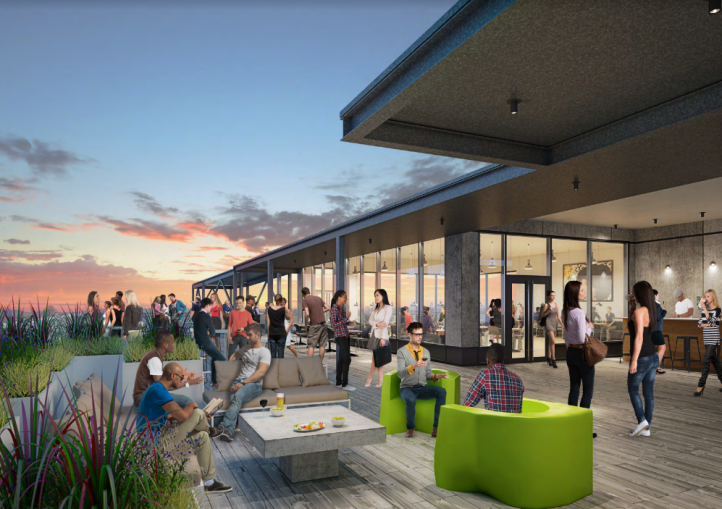 The Breeze, the colorful warehouse-to-office conversion in East Williamsburg, Brooklyn, is getting a rooftop bar and restaurant operated by the founders of the popular Lavender Lake bar in Gowanus.

The yet-to-be-named restaurant will occupy a newly constructed penthouse atop the early 20th century office building at 315 Meserole Street, according to developer Hudson Companies. The fourth-floor space includes a 2,000-square-foot indoor glass restaurant and a 4,000-square-foot landscaped terrace with covered areas for seating. The penthouse can accommodate up to 350 people and offers access to the landscaped courtyard below via a new external stair tower.

“We intend to offer a food and drink menu that leans towards casual but also tends to the demands of quality, craftsmanship and modern mindfulness that we know our clientele will expect,” said Adam Sober, the owner of Lavender Lake, in prepared remarks. “Our rooftop joint will cater to afternoon business lunches, after work socializing, late night fun and elegant events.”

Hudson Companies has also nailed down a ground-floor retail lease with a Latin fusion restaurant, Aura Cocina, for 3,600 square feet overlooking the courtyard. It will offer a full bar and sit-down lunch and dinner options, as well as occasional events in the courtyard.

Both tenants signed 15-year leases, and asking rents for retail in the project range from $35 to $45 a square foot, as Commercial Observer previously reported. Ben Waller of ABS Partners handled both sides in the penthouse restaurant deal and represented the landlord in the Aura Cocina lease. Maria Fernandez of Avison Young represented Aura Cocina.