Aareal Bank and SL Green teamed up to provide the debt 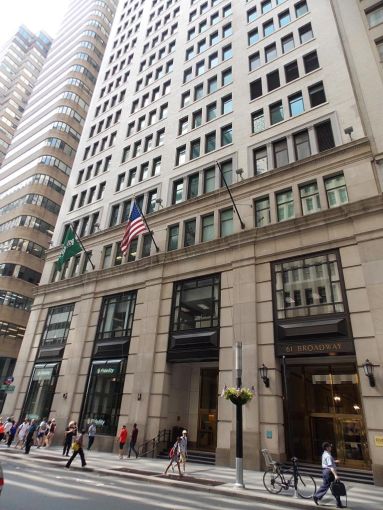 RXR Realty has landed a $325 million refinance for its Class-A office property at 61 Broadway, sources close to the transaction told Commercial Observer.

The 33-story, 790,000-square-foot property—between Rector Street and Exchange Alley in the Financial District—is riding high on a wave of leasing activity. In January, Knotel signed a 10-year deal for 60,323 square feet at the building. The flexible workspace provider took parts of the ninth, 10th and 17th floor as well as the entire 18th floor.

The same month, London-based visual effects company Framestore also signed a 10-year lease, but this time for the entire 32nd floor of the building (24,479 square feet).

RXR acquired 61 Broadway from Broad Street Development in 2013, paying $330 million. The deal marked RXR’s entree into the lower Manhattan market at the time. It recapitalized the property in 2016 with $290 million in debt; a $240 senior loan million from Bank of China and a $50 million mezzanine piece from SL Green.

The building—erected in 1912 for the Adams Express Company, and formerly known as the Adams Express Building—boasts sweeping views of the Hudson River, New York Harbor and Downtown, with views of Midtown and the World Trade Center from its top floors.

RXR has had a busy few weeks in the debt markets. On April 12, it closed a $404 million refinance with Mesa West Capital for 32 Old Slip, and a day earlier it sealed a $375 million loan from Nuveen Real Estate for its much-anticipated redevelopment of the historic Pier 57.