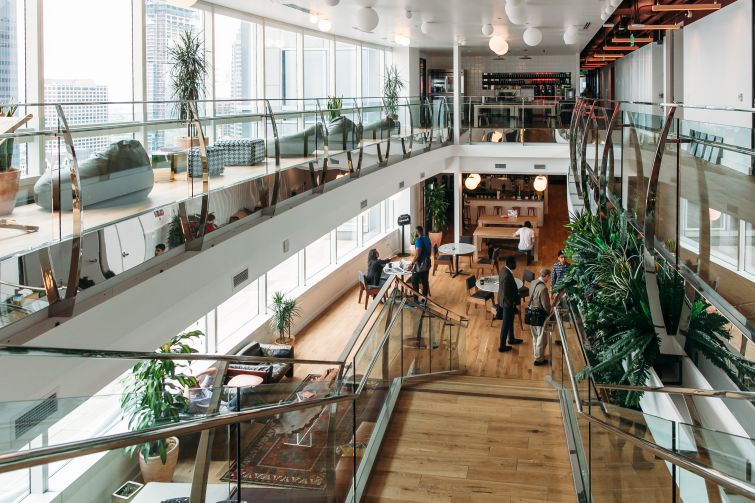 The media and entertainment industries continue to rule much of the office sector growth in Los Angeles, while coworking operators like WeWork snap up large swaths of space in markets where industry professionals seek flexible space, according to a recent report from JLL.

As major legacy studios and other heavyweights like Apple ramp up their digital streaming services to remain competitive, office leasing activity in the entertainment-heavy submarkets of Hollywood and the Westside of Los Angeles, including Culver City, have driven up asking rents and tightened vacancy rates.

While the overall L.A. market in the first quarter of 2019 had a total vacancy rate of 14.4 percent, for instance, the total vacancy rate on the Westside stood at 13 percent. Rents varied as well, with the direct asking rent for overall office product in the central business district Downtown averaging $3.58 per square foot while on the Westside the asking rent was $4.90 a foot, per JLL. (Both were up from the first quarter of 2018, where the average rent per square foot was $3.45 in the CBD Downtown and $4.88 in the Westside market, according to JLL.)

“You’re definitely seeing plenty of other companies getting into digital streaming services,” Devon Perry, a senior research analyst for the office sector at JLL, told Commercial Observer. “Disney is launching their own, Apple has already said they are going to be boosting theirs. Warner Media is also dipping their toe into the game as well. It seems to be happening here in L.A. They’ve definitely decided this is ground zero in terms of production. It’s where the talent is so it makes sense.”

As a consequence, Perry said that the type of space and markets they are targeting are very specific. While she said, there are still “plenty of vacancies” in traditional office space, particularly in Downtown Los Angeles, these users are targeting specific pockets within the markets and product types to suit their needs.

“Generally, there are going after ground-up construction or creative developments. They’re even thinking outside of the box like we saw with Google’s lease at the Westside Pavilion,” she said. “There are plenty of adapted reuse projects that draw the attention of these kind of users so, it’s micro-market specific where we are going to see this growth, but it’s definitely going to bolster L.A. overall.” Google signed on for 584,000 square feet at the former Westside Pavilion, being redeveloped as a creative office, mixed-use property by Hudson Pacific Properties in partnership with Macerich in January.

While media and entertainment companies continue to expand streaming services, the impact on office leasing stemming from The Walt Disney Company’s $71.3 billion acquisition of 21st Century Fox’s film and entertainment assets will begin to be felt. As the consolidation has started to take shape, the Big Mouse announced layoffs while the company works to eliminate redundancies and re-evaluate business operations to adapt to the rise of global streaming. With some estimates as high as 4,000 potential layoffs, Fox’s office footprint in the Westside market of Century City is in question. While the Murdochs are keeping the 20th Century Fox studio lot as part of the newly branded Fox Corp., which is made up of assets not purchased by Disney, the company is leasing a big part of the space to Disney for at least seven years, per terms of the merger, as Variety reported.

WeWork already occupies 2 million square feet throughout Los Angeles and ongoing growth is expected to continue, per the JLL report. A spokeswoman for WeWork did not immediately return a request for comment.