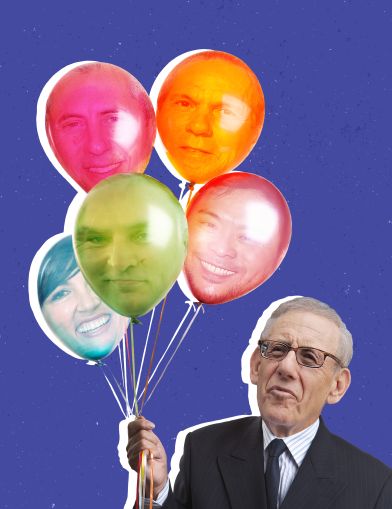 Steve Ross and the celebrity chefs at The Shops and Restaurants at Hudson Yards. Illustration: Kaitlyn Flannagan

On Friday, The Shops and Restaurants at Hudson Yards, opened to the public. The seven-storied retail mecca—lined with luxury brands, emerging retail concepts, three floors of Neiman Marcus, and restaurants helmed by world-famous chefs—sits in the center of a shiny new megatropolis on Manhattan’s far west side.

The Shops were always an integral part of the massive complex developed by Related Companies and Oxford Properties, which includes a forest of supertall office and residential buildings, a cultural center called The Shed, and the tourist attraction-cum-staircase temple known as The Vessel.

With a captive audience of 40,000 workers and commuters per day (which works out to about 10 million per year), the retail complex is also the delta of the High Line, a conveyor belt of another eight million tourists a year, and the only escape for the Javits Conference Center’s two million visitors per year.

Those numbers were part of what convinced luxury brands like Christian Dior, Tiffany’s, Rolex and Stuart Weitzman to sign on to the project, as well as celebrity chefs like Thomas Keller, David Chang and José Andrés.

But they’re not enough to ward off skepticism born of a battered retail market, and the inconvenient fact of the hundreds of dead shopping malls around the country.

“I don’t get it!” said Richard Kestenbaum, a partner at Triangle Capital. “All that money, all those smart people, all those resources, all those tax breaks, all that blank space that could have been something great—where did it go?”

His main criticism was that it was more of the same. “I was surprised we didn’t see more experimentation,” Kestenbaum said.

Keven Steussi, a member of the Related retail team would disagree. He told Commercial Observer the shopping center is about doing things differently. “There are a lot of very unique things that retailers and restaurateurs are doing here, and it’s about bringing them all together in one spot,” Steussi said.

In addition to the recognized luxury brands and star chefs, Related curated a collection of emerging and experimental brands, some of which are opening brick-and-mortar stores for the first time, including B8ta, a storefront for trying gadgets from a cross-section of brands, 3den, an airport lounge-style space where visitors pay by the hour, and Mack Weldon, a formerly digital only men’s underwear brand.

Another emerging concept is Batch, a San Francisco-based design store that rotates a collection of products every two months and is opening its first New York City location at The Shops. Lindsey Meyer , the owner, met the Related retail team at the International Council of Shopping Centers convention at the Javits Center in December of 2018 and signed a short-term lease the next month for a 2,000-square-foot showroom that had already been built out.

“Everything was taken care of, and that was totally the difference in us being able to come here, especially on such a tight timeline,” Meyer said.

Part of the attraction for Meyer was being so close to new residential developments with new tenants moving in, the perfect demographic for Batch’s offering. But it was also important that it was a short-term commitment. “It’s hard to make a much longer commitment early on when you’re not quite sure how things are going to go,” Meyer said.

While working with untested brands could pose a risk for Related, as well as for the brands themselves, Steussi says they were carefully selected for success stories, like Mack Weldon, of which he’s a fan.

“I’m wearing Mack Weldon right now as a matter of fact,” Steussi said. “It’s great to be able to pop into the store.”

Another newer brand is Sundays, a wellness salon in a home-like setting, where visitors can meditate during a pedicure or stop in for a tea tasting. Sundays signed a 10-year lease for an 1,100-square-foot space, its third location.

Sundays’ founder, Amy Lin, said that at first, she was concerned about the mall-like setting, and was worried that her brand wouldn’t fit in. “When I entered, it was very beautiful and very perfect,” Lin said. “But in my mind, I thought, ‘Oh my god, do I have to wear heels here?’”

Related assured her that it wasn’t just another shopping mall, Lin said, but an integrated community. One of the factors that convinced her was that Related will integrate Sundays’ programming (guided meditation, book club) into the event programming for the residential buildings. “It’s so great for us to connect with residents,” Lin said.

Overall, the mall is fairly traditional but there are quite a few experimental touches, with a lot of focus on service and experience. At Neiman Marcus, visitors can go to a brow bar, visit a food market, order custom-made cowboy boots, or lounge in the 8,000-square-foot section for women’s shoes.

In addition, both the retail and food options are designed to cater to every price point, Kenneth Himmel, the head of Related’s retail leasing team, said. Brand-name chefs are bringing new concepts, like Kawi from David Chang, Queensyard from London-based D&D, and Mercado Little Spain from José Andrés, which will mostly be situated on the fourth and fifth floors for optimal views, while crowd favorites like Shake Shack, Fuku and Maison Kayser will be dotted throughout the complex.

The shopping center is 90 percent occupied, and about 80 percent of the shops and restaurants will open during Friday’s grand opening.

Neiman Marcus’s opening tagline, “New York has a new playground,” is accurate, and also telling. There’s no doubt that there’s a lot to see at Hudson Yards, but what happens when it’s no longer new?