Life of Bryant: Bryant Park’s Transformation Into the Center of Midtown

How a park went from a haven for drunks and idlers to some of the most desirable real estate in New York. 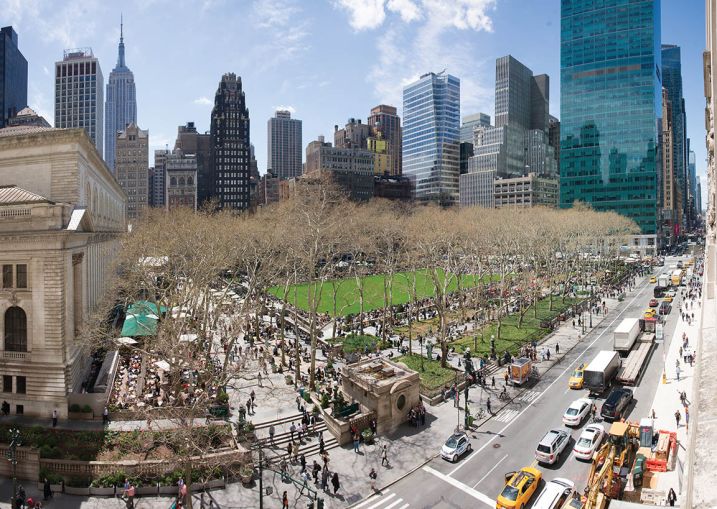 BRYANT PARK WAS NICKNAMED "NEEDLE PARK" IN THE 1970S BECAUSE OF ITS POPULARITY AMONG DRUG USERS. IT'S NOW BECAME ONE OF THE BIGGEST AMENITIES NEARBY LANDLORDS CAN OFFER OFFICE TENANTS. Photo: Getty Images

It’s only in the last decade that landlords in Midtown could expect to sell a $6 million condominium unit across the street from Bryant Park or set office rents at more than $100 per square foot.

The nearly 10-acre public Bryant Park—once dubbed “Needle Park” for its popularity among the city’s drug users—has completely changed over the past two decades. Now it’s one of the biggest amenities a landlord can offer tenants: A place its workers can sit during their lunch break (in spring and summer), go ice skating (in the winter) or catch a concert (in the summer).

“That was the place you avoided,” said David Levy, a principal of Adams & Co., which has owned the 12-story 4 Bryant Park, at 1071 Avenue of the Americas between West 40th and West 41st Streets, since the 1940s. “Now, in the summer it’s a place to go, in the winter it’s a place to go. [The Bryant Park Corporation] just did it right and it’s a real testament to them.”

The nearly $10 million revitalization of the park—along with a city-backed redevelopment of nearby Times Square—has brought new projects, retail shops and restaurants to the area. A crop of office buildings started popping up in 1999, such as Durst Organization’s 4 Times Square in 1999 and One Bryant Park in 2008.

One of the most recent eye-catching projects is the 30-story glass tower 7 Bryant Park, owned by Bank of China, which opened in 2015 and won praise from The New York Times’ architecture critic for its distinctive v-shaped design.

“The Bryant Park area could be considered the center of Midtown today,” said Thomas Bow, the executive vice president of commercial leasing at Durst. “The most desirable location is Bryant Park.”

The area’s central locale and myriad transportation options help make it an easy choice for companies looking for space, Bow said. It has numerous subway stations within walking distance, the PATH train to New Jersey and plenty of express bus stops to the outer boroughs.

“Every employer is demanding so much more from their employees than they did 20 years ago,” Levy said. “You’re asking people to come early and stay later, you want to be able to get to and from work as quickly as possible.”

All of this helped make it a relatively easy transition for Durst when Condé Nast announced in 2014 it was leaving its 817,000-square-foot space at 4 Times Square, also known as 151 West 42nd Street, for Lower Manhattan. Bow has made sure to focus heavily on Bryant Park in his pitch to potential tenants for that space, which represents nearly half of the building.

“What’s made it easier is the area around Bryant Park has gotten so desirable,” Bow said. “When we marketed the building [to fill Condé’s space], we clearly chose to look towards the east and our connection to Midtown.”

As the area cemented itself as a hub for office workers, new projects have followed to give employees places to live nearby. HFZ Capital Group’s half-condominium-half-hotel project The Bryant at 16 West 40th Street had its first residents move in last year while nearby Skyline Developers’ 62-unit rental building ML House at 1050 Avenue of the Americas launched leasing in December 2018, Curbed New York reported.

“Putting condos there made sense because certain people like to live near where they work,” said Christophe Lagrange, a managing director at HFZ. “We viewed it as more of a younger crowd, not big families. This isn’t your Upper West Side-profile buyer; it’s somebody that works in the area and wants a one-bedroom or wants a pied-à-terre.”

HFZ picked up 16 West 40th Street for around $45 million in 2010, after a previous developer foreclosed on it, and immediately saw the potential in the former parking lot on a block surrounded by landmarked buildings.

“It was very clear that it was a very prime piece of property,” Lagrange said. “It’s really the last underdeveloped piece of property on Bryant Park. To us, that was an amazing opportunity to try and build [what will become] another landmark on that street.”

The company tapped David Chipperfield to design the 33-story building, the famed architect’s first residential project in the city. The building will include a 226-room hotel with 57 condo units on the top three floors. The building is 75 percent sold, with 15 apartments available, including its $16.3 million penthouse, Lagrange said. HFZ is still finishing up six of the units.

While the area was not considered residential, stores like Whole Foods Market opening at 1095 Avenue of the Americas in 2017, restaurants like the Michelin-starred Gabriel Kreuther opening at 41 West 42nd Street and all the office buildings springing up meant “it was not a hard sell” for condo buyers and HFZ has sold units from $2 million to $9.4 million, Lagrange said.

“I think [Whole Foods] extended Bryant Park across Sixth Avenue to an indoor venue with food amenities,” said Chase Welles, a broker at SCG Retail who represented Whole Foods in the deal. “It certainly provided a center of energy for the retail scene.” He added that “Whole Foods has been and will continue to be an important anchor.”

Those amenities, and of course the park itself, is what keeps attracting office tenants to sign leases in the neighborhood. When the former president of investment sales at Cushman & Wakefield and failed mayoral candidate Paul Massey needed a home for his new brokerage, B6 Real Estate Advisors, he couldn’t think of a better location.

“There’s a liveliness and vibrancy that doesn’t exist in the same way, even around Grand Central,” said Massey, who subleased 12,010 square feet from DHI Group at 1040 Avenue of the Americas last year. “If you haven’t been there in a while, it’s shocking how well it’s maintained and how much is going on there. We’re really happy we moved in.”

But decades ago, calling Bryant Park a lively area would’ve been a morbid joke. It was used as a site for military drills during the American Revolution and in 1823 became a potter’s field, a public cemetery to bury unknown or indigent people, according to the New York City Department of Parks and Recreation.

The city decommissioned the land as a potter’s field in 1840 for the construction of the former Croton Distributing Reservoir and it was designated a park in 1871, according to the parks department.

By the 1930s, Bryant Park became neglected and “a haven for drunk and idlers,” according to Robert Caro’s biography, The Power Broker, about former parks commissioner and infamous builder Robert Moses. Things didn’t get much better when businessman Grover Whalen wanted to use it to celebrate the bicentennial of George Washington’s inauguration in 1932.

Whalen stowed away the park’s statues, put up walls around the park and built a “flimsy,” $150,000 model of the building, Federal Hall, in which Washington was inaugurated and planned to charge people 25 cents to view it, according to The Power Broker. Few people wanted to see it and the city eventually had to foot the bill to demolish it, leaving a weed-filled field.

Moses renovated the park in 1934, but his design left the park essentially hidden to the public and a perfect hideout for illegal activity, eventually leading to the nickname “Needle Park” in the 1970s because of the large number of drug addicts who frequented it, per The Power Broker and Gothamist.

In 1988, the Bryant Park Restoration Corporation commenced an extensive renovation of the park, building new entrances with better visibility from the streets and refreshment stands as well as restoring the monuments, Gothamist reported. The park fully reopened in 1992, according to the parks department.

While the park was shedding its bad reputation, the nearby Times Square started to do the same in the 1980s thanks to a big push of its redevelopment by Mayor Ed Koch that finished in 2010, The New York Times reported.

Durst, an early believer in Times Square, was able to secure sizable commitments from law firm Skadden, Arps, Slate, Meagher & Flom and Condé Nast for 4 Times Square in 1996, which eventually grew to both companies assuming the entire 1.8-million-square-foot building between West 42nd and West 43rd Streets, when it opened in 1999.

However, Condé Nast announced in 2014 it would ditch its 817,000 square feet at 4 Times Square for Durst’s 1 World Trade Center in the Financial District while Skadden said that same year it would leave its nearly 600,000-square-foot-offices in 2020.

Durst got to work by renovating Condé Nast’s Frank Gehry-designed cafeteria into an amenity floor with a food hall for tenants run by Michelin-star chef Claus Meyers. So far, Durst has leased about 80 percent of Condé’s old space and 100,000 square feet of Skadden’s former office, with Nasdaq taking 145,000 square feet and much going to mid-sized tenants, Bow said.

“We benefited from being half a block away from Bryant Park,” Bow said. “We expect people to go to Bryant Park and enjoy the restaurant scene around there.”

Others have started to see the potential Durst did all those years ago. Aside from HFZ and Skyline, Savanna made a splashy $640 million purchase of the 35-story 5 Bryant Park from Blackstone Group in May 2018, as Commercial Observer previously reported. A spokesman for Savanna declined to comment.

Savanna plans to extensively renovate the building between West 40th and West 41st Streets with a redesign of the lobby, entrance and signage along with the renovation of its bathrooms, corridors, terraces and windows.