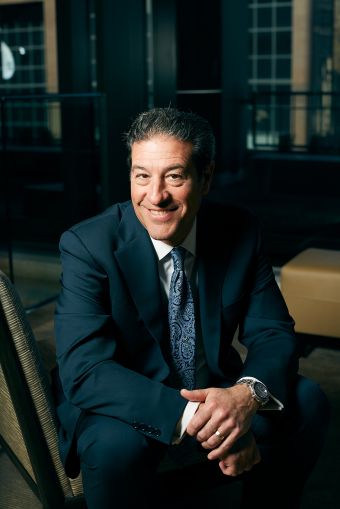 When one of the city’s most iconic buildings goes into contract, it’s only natural for there to be plenty of industry chatter about the players putting the deal together.

In the case of the Chrysler Building, those brokers are CBRE’s William Shanahan and Darcy Stacom, two of New York City’s most prolific institutional investment sales professionals.

As was reported earlier this month, RFR Realty and Signa Holding GmbH—Austria’s largest privately owned real estate company—are paying $151 million to acquire the leasehold for the landmark Midtown office tower. Shanahan and Stacom are representing the sellers, Tishman Speyer and Abu Dhabi Investment Council. The buyers have no brokers in the deal.

Shanahan, 62, is chairman of New York City capital markets at CBRE, and Stacom is chairman and head of their group.

Shanahan has had his hand in the sale, purchase or recapitalization of many of the city’s most iconic assets. Along with Stacom and their team of 14 professionals and six support staff, Shanahan was involved in the $5.4 billion sale of Stuyvesant Town and Peter Cooper Village in 2006, the $2.8 billion sale of the General Motors Building in 2008 and the 2015 sale of the Helmsley Building at 230 Park Avenue for $1.2 billion.

Shanahan—who has a B.S. in communications and business and a master’s degree in finance, both from St. John’s University in New York—resides in Long Island, N.Y., with his wife Sharon. They have a 24-year-old daughter, Demi, who works in pricing and brand management for Anheuser-Busch in St. Louis, Mo. Shanahan’s 26-year-old son, Justin, is in the global investors group at CBRE.

Commercial Observer caught up with Shanahan last Tuesday, a few days after he and his son returned from skiing in the French Alps.

Commercial Observer: Let’s start with talking about the Chrysler Building.

William Shanahan: I can’t make any comments about the Chrysler Building.

Because people that buy the trophies tend to hold them very long term.

Why at this time though?

There is no hard and fast reason. That’s one element; the other is situational—whether they want to sell or not.

Before Chrysler, what was your last deal in Midtown?

Who’s taking advantage of the Midtown East rezoning [approved in 2017 and allowing for greater density]?

You heard the announcement for the [Grand] Hyatt [hotel] by TF Cornerstone [and MSD Partners]? They’re going to take advantage of the rezoning. The Hyatt hotel is going to be redeveloped across the street from the Chrysler Building. One Vanderbilt, right out the window here [from the conference room at CBRE’s offices at 200 Park Avenue], took advantage of Midtown East rezoning. J.P. Morgan Chase—they’re right here and they’re tearing their tower down [at 270 Park Avenue] and rebuilding it.

Do you have any properties you’re selling that fall within the 78-block Midtown East special district?

We have a site that we have been marketing at 417 Park [Avenue]. That’s in the Midtown East district. It’s a residential co-op in a commercial district.

Is that the only one in the rezoning area?

Well we have under contract 410 Madison [Avenue], which is the former Bank of China’s headquarters. [J.P. Morgan Chase is buying it for upwards of $100 million, as CO reported last week.]

Are people consulting you about air rights?

We don’t get consulted independent of an assignment. Something like that would be handled by our appraisal group.

What are your thoughts on the rezoning?

I think the rezoning is great for Midtown. You know you have a lot of buildings that were built in the 1960s and 1970s to a set of standards that aren’t necessarily desirable today. The ability to redevelop those buildings into more modern buildings with the amenities, the kinds of floor heights, airflow and other things that people are seeking, it’s going to be a big boon for Midtown. You know our last big construction boom was really in the 1970s, maybe early 1980s. The average age of a Manhattan office property is 77 years old.

Anything else on your mind, Midtown-wise?

I think really the big story is the Midtown East rezoning. There are people trying to figure out how to avail themselves of that. The flip side of that is it’s great for a lot of these particular landmark structures—Grand Central [Terminal], St. Pat’s, St. Bart’s—that have all these air rights. [Another issue is] the Long Island Railroad. Long Island Railroad coming to Midtown we think is a big, big boost for Midtown.

Have clients mentioned it as a factor in their real estate decisions?

I think that’s part of why people are focused again in the Grand Central [Terminal] area. It was one of the things that HNA focused on when they bought 245 Park [Avenue in 2017]. It came up in conversations when we were selling 685 Third [Avenue] for [TH Real Estate in 2017].

Do you highlight that in marketing materials?

Yeah, because [when] people buy a building they want to know somebody is going to rent it. Part of that equation is convenience for their employees. So being able to come into Grand Central rather than Penn Station makes it a lot more convenient for people whose companies are here in Midtown.

What do you think is going to happen with investment sales this year?

In terms of volume it should be equivalent or better than last year. But it seems offerings that are coming on the market, at least initially, have felt to be higher quality. Chrysler is an example of that.

What else besides Chrysler?

There’s 30 Hudson Yards. There was an offering at 28 West 25th Street. Unizo owned it. 28 Liberty [Street] is on the market—very high quality. We will be bringing to market 330 Madison Avenue. We’ll be selling [Abu Dhabi Investment Authority’s] stake, which is a 75 percent stake. [Vornado Realty Trust has the remaining 25 percent stake.]

When is that going to come to market?

We’re still trying to figure that out.

Where are you at with the sale of the stake in 28 Liberty Street?

We’re trying to conclude the process. We have a specific party we want to transact with.

Better opportunity. The market was evolving, and we thought CBRE was in the right place for that. One thing that CBRE has today that really differentiates it besides all the business lines is their international platform is by far the best.

Was the international platform one of the big factors in your moving to CBRE?

It was a big factor. We were seeing a lot more international participation in the market. We were also starting to see more recapitalizations, which tend to be a flavor that’s as big internationally as it is domestically. You know [CBRE has] real people in pretty much every major city around the globe. We have offices and they’re not partnerships or JVs. They’re CBRE offices.

When did you and Darcy start working together?

We still try to figure out exactly when we became partners. It’s some time in the mid-1990s.

How did that come about?

It evolved. You know the company, rather than having us compete, wanted us to work together.

Is Darcy senior to you?

We’re partners. She runs our team though.

What are your individual strengths?

She is extraordinary at marketing and figuring out the marketing angles and she has a very quick mind. I’m good with numbers and structuring and dealing with the international investors. Recaps and structured deals are my strong suit.

Darcy’s name gets bandied around a lot—do you ever feel like you’re in her shadow?

No. If I had felt that I would’ve left a long time ago. She’s always been a bigger personality between the two of us.

And she’s a New York City’s real estate powerhouse, an anomaly for women in the business.

Women in the real estate industry are a minority. So when you have somebody that’s that talented and that good at what they do they should get a lot of publicity.

You guys are constantly at the top of the heap for investment sales in New York City. To what do you attribute your success?

Attention to detail. Really. And we put the client first. We don’t do a transaction so we can get another transaction; we do the transaction to get the best outcome for the client. I don’t think all my competitors do the same thing.

You go up against Adam Spies and Douglas Harmon a lot.

We do. We did [when they were] at Eastdil. Now [with them] at C&W we go up against them.

What do you think makes them such fierce competitors?

Do you think their approach is much different from yours?

I think you could ask some clients that and I think you’d get some pretty good answers.

What about that competition is fun for you?

I think the fun part is pitching against them and winning. And it’s what keeps you on your toes. But again, it’s like every business—Coke and Pepsi, Google and Apple.

Coke and Pepsi. They are very different.

I’m not a big soda drinker, but my son tells me they taste different.