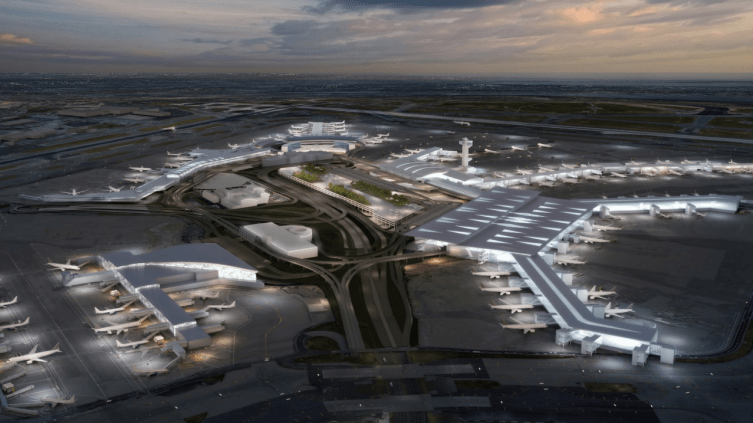 British Airways will relocate from its current spot in Terminal 7, which will be replaced as part of JetBlue Airways’ plan to build a new terminal on the north side of the airport. The Terminal 8 renovation will add 70,400 square feet of space and upgrade 57,500 square feet of existing space. The updates will include new lounges for American Airlines and British Airways, enhanced baggage systems, new check-in areas and new concessions. There will also be five new extra-wide gates for transatlantic flights and four nearby areas on the airfield for additional flights to load or unload passengers. The Port Authority of New York & New Jersey won’t contribute any funding to the Terminal 8 construction, per a release from the governor’s office.

The expansion is part of Cuomo’s $13 billion plan to overhaul JFK Airport, which was updated last October with new details. Terminal One Group, a coalition of four international airlines—Lufthansa, Air France, Japan Airlines and Korean Air Lines—will develop a $7 billion, 2.9-million-square-foot terminal on the south side of the airport. It will replace the existing Terminals 1 and 2 and the now-demolished Terminal 3. The north side of the airport will welcome a new $3 billion, 1.2-million-square-foot terminal developed by JetBlue. The domestic airline plans to knock down the existing Terminal 7 and connect the new structure to the existing, 11-year-old Terminal 5. Construction is expected to begin in 2020 with the first new gates opening in 2023 and completion expected in 2025.

The state Department of Transportation also plans to make $1.5 billion worth of upgrades aimed at easing congestion on the highways leading to JFK, focusing on the Kew Gardens Interchange and the Van Wyck Expressway.

Last year, a record-setting 61 million passengers traveled through JFK, and all of this new construction is expected to accommodate an additional 15 million travelers annually, Cuomo’s office predicts.

And on the private construction front, MCR Development and JetBlue have converted the landmarked former TWA Terminal at JFK into the retail portion of their new TWA Hotel, as Commercial Observer has previously reported. The 200,000-square-foot building will hold more than a dozen bars and restaurants, including an Intelligentsia coffee bar. The ground-up, two-building hotel will have 512 rooms and is expected to open this spring.