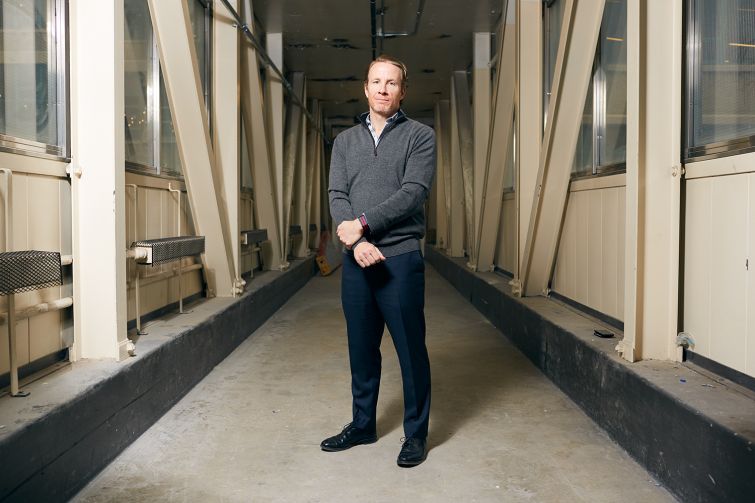 It made perfect sense when David Falk, the president of the New York tri-state region at Newmark Knight Frank, was looking to open a Brooklyn outpost five years ago that he considered Whitten Morris to run the office.

Morris ticked off a lot of the boxes. He honed his skills working in Manhattan for two of the city’s major brokerages—CBRE for nearly three years and Cushman & Wakefield for almost nine years—and knew Brooklyn inside and out having grown up in the borough and raising his family there.

“I wanted to bring someone in that I thought was very connected to the Manhattan market and understood the relationships and understood how we transact,” Falk said.

Morris had done a lot of high-profile and sizable deals in Manhattan, including a 96,000-square-foot lease for Kate Spade New York and a 100,000-square-foot lease with Gilt Groupe, both at 2 Park Avenue, as part of Tara Stacom’s C&W team representing property owner Morgan Stanley Real Estate Fund. (Falk represented Kate Spade in the 2 Park Avenue deal.)

Mitchell Arkin, an executive director of brokerage at C&W, who was on the 2 Park Avenue team with Stacom and Morris, said of his former colleague: “I just found him to be a great person to work with. I liked him a lot. He worked hard, he was smart, he had a great attitude and he liked to learn.”

While Stacom was sad when Morris left C&W (first for a brief stint as the head of leasing for the commercial division at Rockrose Development before landing at NKF in September 2015), she said it made perfect sense that he would run the Kings County division for NKF.

“It’s his backyard,” said Stacom, an executive vice chairman at C&W and one of the city’s top office brokers. “He’s got a lot of history and has real context in that marketplace. He knows about each corner and can see the trends quicker.”

Since opening the Brooklyn office, Whitten, 44, has put together a team of agents: three for office leasing (including him), two on retail leasing and two for investment sales. Working out of a super bare-bones office, the office agents have accrued 3 million square feet in leasing assignments in the borough. Of that, 1.1 million square feet is for projects that are under construction or in the pipeline.

But at the projects he is focusing on, especially in the Dumbo office market, he said his team is faring well.

“I think the perception can be out in the market that Brooklyn is not doing well. But we see it doing very well,” said Morris, who resides with his wife and two sons, five and nine (who both go to Saint Ann’s School like Morris did), an eight-minute walk from his Dumbo Heights office, a four-building complex for which he is the office leasing agent.

A case in point is the 800,000-square-foot Dumbo Heights, owned by Kushner Companies, RFR Holding and LIVWRK, which Morris said is 99 percent occupied. (The buildings were 82 percent occupied when the owners hired Morris’ team to lease them in June 2017, according to Tom Lavin, a vice president of office asset management at RFR.)

“Whitten is our eyes and ears on the ground at Dumbo Heights,” Lavin said. “He understands the landlord’s point of view better than most agents and his encyclopedic knowledge of the Brooklyn market has helped us modify and calibrate how we market, operate and lease space at the Dumbo Heights campus.”

While big and notable tenants would be a coup for Brooklyn, brokers there have had to make peace with a stable of deals of less than 80,000 square feet apiece.

“I mean, it helps Brooklyn if Amazon said they were choosing us, right?” Morris said. “There would be pushback from someone, but [if] Google comes here, they’re taking a million square feet in Downtown Brooklyn; that’s good for Brooklyn. But there are other ways to skin that cat and get action. You can keep getting those 30,000- to 50,000-square-foot tenants. You keep getting United Technology kind of companies to come and take [70,000 square feet].”

Patrick Sweeney, a managing director at Related Fund Management, the private equity side of Related Companies’ business, has been seeking Morris’ counsel in assessing two potential acquisition sites in Brooklyn.

“I would say we consider Whitten our go-to call for anything in Brooklyn,” said Sweeney, a friend who lives 100 yards from Morris. “He grew up in Brooklyn and even before he was 100 percent focused on Brooklyn, he actively followed it. Since he’s become the head of the office there, 100 percent of his time is making sure he knows everything going on in Brooklyn.”

Growing up in Brooklyn Heights, Morris recalled, “It was sketchier—just Brooklyn had a lot of a lot more rough edges. And all these neighborhoods that we hear about now were not really considered viable commercial areas—like, no one would go there. I remember coming down to Dumbo when I was in high school, in middle school. And this is where we’d sneak away with groups of kids to have a good time.” He was referring to the plaza under the Brooklyn Bridge, known just as U.T.B., for under the bridge.

Morris has seen the area since become “like a cool place to be” and “sort of a brand.”

While Brooklyn has certainly come a long way since Morris’ childhood, perhaps the fact that only two of the four major brokerages (Newmark and C&W, not CBRE nor JLL) have a Brooklyn office is a sign of how far the borough still has to go.

It wasn’t too long ago that the borough was home to only home-grown brokerages. But those firms aren’t providing competition, per Morris.

“When the largest landlord in the country is building a project, there’s a sort of a gravitas and experience they need and local firms haven’t handled 500,000-square-foot buildings,” Morris said. “That’s more in the wheelhouse for someone like a Newmark. If there’s a 10,000-[square-foot development] in the middle of nowhere Brooklyn, we may not be the best resource for it.” Similarly, Falk noted that NKF is “looking to do larger offerings” than are the smaller Brooklyn firms.

One landlord touted that in addition to Morris dwelling and working in Brooklyn, his company affiliation mattered.

“As much as we liked that Whitten was from Brooklyn, the Newmark platform is interesting, and we know he’s in daily touch with the Manhattan and Long Island teams,” said Gregory Blake, a director at Meadow Partners. “If we only had a Brooklyn-focused broker they might not have the same platform or reach as a national or international firm would have.”

Meadows Partners bought Helen Keller Services for the Blind’s headquarters at 57 Willoughby Street, a six-story, 96,000-square-foot building, for $54 million in December 2016. Helen Keller occupied half the building until a month ago.

“In the interim, he and his team cut new deals with existing tenants, and created a building within a building,” Blake said. With Helen Keller gone, Morris’ team has “the top half of the building to lease.”

Morris “reached two new 15-year leases for long-term [nonprofit] tenants. They both needed to expand. They had outgrown their spaces. So, we offered building them new entrances and giving them [tenant improvements] in exchange for new leases, bringing up the rent and expanded spaces.”

Morris has been invaluable at Dumbo Heights, per Lavin.

Outside of work, Morris is an established squash player, playing in amateur and professional tournaments. (He was slated to play in a Brooklyn tournament last weekend.) Morris met landlord Edward Minskoff on the court 15 years ago, and the pair has played in doubles tournaments together. While they haven’t partnered off the court, Minskoff said: “In business, he has a good reputation. He’s morally top notch, and he’s believable. And that’s important, especially in the brokerage business.”

Besides squash, Morris plays tennis and skis. “He’s one hell of an athlete,” said Brian Waterman, a principal at NKF, who was disappointed when, two weekends ago, he arrived in Aspen for skiing just as Morris was heading home.

“Athletes make good brokers because they understand the dedication that’s involved and the commitment,” Waterman said. “It’s not a job. It’s a commitment.”

Real estate attorney Jonathan Mechanic, a partner at Fried Frank, knew Morris as he was growing up (he was friends with Morris’ parents) and remembered a strong tennis player in his adolescence. He noted that Morris still is “a first-class tennis player and squash player.” He added, “He’s also my guy for Brooklyn. If I want to know something about Brooklyn or the Long Island City market [I call Whitten].”

A couple of weeks ago, Mechanic and another Fried Frank partner had Morris give them a tour of real estate development in Brooklyn and LIC.

Clients really like Morris, a number of his current and former colleagues said.

“Whitten is very likable,” Stacom said. “He has a great personality—he’s fun and he’s genuine. Those two attributes win people over very quickly.”