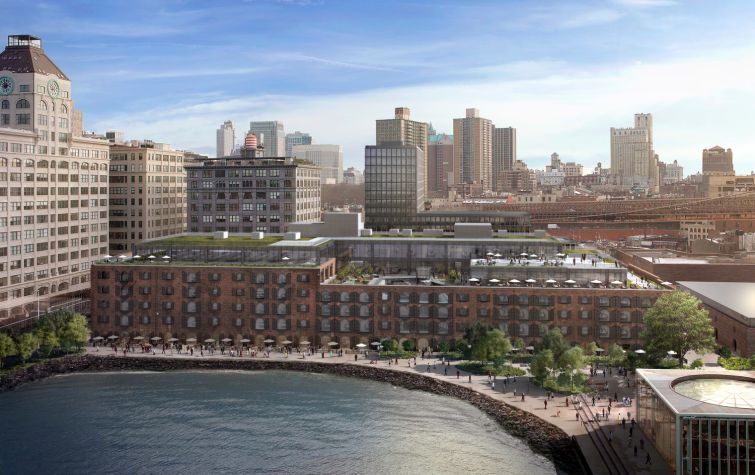 UTC struck a deal to open a 67,000-square-foot digital accelerator in Midtown Equities‘ waterfront commercial development at 55 Water Street, right next to Brooklyn Bridge Park. The Farmington, Conn.-based conglomerate plans to invest $300 million in the space, which will create 250 tech jobs.

The accelerator will “serve as a hub for attracting digital talent and unlocking the power of software and analytics to further broaden UTC’s world-class portfolio of commercial building and aerospace products and services,” according to a press release from the Empire State Development Corporation.

“United Technologies has a long history in New York, starting in 1853 with the invention of the safety elevator by Elisha Graves Otis in Yonkers and the creation of modern air conditioning for a Brooklyn-based printing plant by Willis Carrier in 1902,” said Greg Hayes, the chairman and chief executive officer of United Technologies, in a statement. “More than 100 years later, we remain committed to New York and are grateful for the support of New York State and Governor [Andrew] Cuomo. Their support was instrumental in our decision to establish our new state-of-the-art digital hub in Brooklyn as we take the next step in advancing our digital initiatives across all of our businesses.”

The state tax credits come from the Excelsior Jobs Program, which rewards large companies for creating jobs in New York State. In January, Spotify scored an $11 million rent reduction for its 15-year lease at 4 World Trade Center through the program. In exchange, the music streaming service committed to add 1,000 jobs to the 800 it already has in New York City. Snapchat, Warby Parker, Etsy and BuzzFeed have also benefited from the tax credits, in return for creating 2,000 jobs and adding 1,500 more in the city.