Brooklyn Coworking Spaces Are Getting Back to the Fundamentals 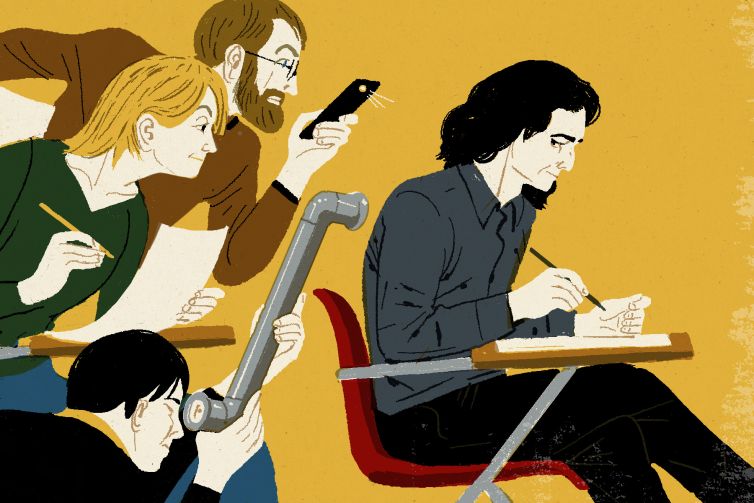 Following in WeWork's path, the number of coworking spaces opening in Brooklyn has nearly doubled since 2016. Illustration: Pep Montserrat

Brooklyn is the birthplace of WeWork. Before Adam Neumann and Miguel McKelvey launched the coworking company in 2011, Neumann ran a baby clothing store and McKelvey worked in an architecture firm in the same building in Dumbo. In 2008, the two convinced their landlord to let them lease vacant space in the building to other entrepreneurs. They named their business Green Desk.

The company was a success, and within a short time, the founders sold Green Desk back to their landlord and launched a new venture with a similar concept across the East River: WeWork.

Green Desk still operates out of the Dumbo building at 155 Water Street, and with eight other locations in Brooklyn, is one of the larger coworking operators in the borough.

Meanwhile, WeWork grew up to become a $45 billion company and the largest tenant in Manhattan. Last year, the already voracious flex office sector spawned by WeWork went through another growth spurt, taking 18 percent of all 32 million square feet of office space leased in Manhattan, according to CBRE.

While WeWork has evolved, its initial ethos of independence and community has taken hold, and nowhere is this truer than in Brooklyn. Over the last decade, the coworking scene in Brooklyn has thrived in its own way and remained as diverse and eclectic as ever. While the flex office giants, like WeWork and Knotel, all have outposts in the borough, the majority of operators are small, niche spaces serving the borough’s many roving professionals, freelancers and entrepreneurs.

The coworking sector in Brooklyn continues to diversify and spread throughout the borough while keeping an eye on the original WeWork model that spun into something different. Many spaces now specialize in and target specific industries or communities, and the range of amenities and services has grown to meet demand.

Since early 2016, the number of coworking spaces in Brooklyn has more than doubled, from 21 to 46 locations, excluding spaces by the nationwide flex office chains, according to a count by New Worker Magazine.

Pauline Roussel, the CEO and co-founder of the Berlin-based networking firm Coworkies (which connects people in coworking spaces) has toured coworking locations in 46 cities. She said that Brooklyn has some of the more creative models she’s seen.

“Brooklyn always stood out for its creativity and being a bit more artsy and the coworking scene reflects that a lot,” she said. “If you compare it to other cities of Europe there’s so much creativity and different concepts.”

Coworking is in Brooklyn’s roots, and some of the borough’s shared spaces predate the WeWork wave. But unlike now, they wouldn’t have been recognized as coworking. Brooklyn Writers Space, a space dedicated to writers with two locations, started in 2004, while b[x] spaces, a company that converts warehouse space in Bushwick for artists, started in 2008.

Back then, said Vincent Benedetto, a co-founder of b[x], coworking was still in its infancy. “There were a lot of mom-and-pop spaces out there, more along the lines of artist collectives,” he said. “But it wasn’t really managed in the way people have come to expect from coworking spaces.”

Once the wave began, coinciding as it did with post-recession unemployment and millennials entering the workforce, coworking got a name and cultural cachet. It responded to and catalyzed a societal shift in the way people worked. It wasn’t just writers and artists with demand for flexible workspace anymore, now it was also startups and digital nomads and corporate workers on work-from-home days. It became clear that the coworking model was here to stay.

Benedetto said that his company, as well as many of the others in Brooklyn, are not really in the same business as WeWork.

“They need to be in Class A real estate, in [the Financial District] or Midtown, while we’re in the industrial zones,” he said. Not only that, but b[x] caters to makers, designers and artists, people who need to make a mess, run loud equipment, and aren’t looking for an office environment, even if it does come with beer on tap.

That’s true for many of Brooklyn coworking spaces, and they have begun to specialize further. Coworking has become much more than just a place to rent a desk. Some spaces double as incubators, offer workshops, art gallery space, or networking and social events.

One particular trend is the rise of spaces that cater to specific communities, like The Wing, which has one location in Brooklyn, and the soon-to-be-opened House XX at 61 N. 11th Street, which welcome women only. Many target specific industries, like Shared Brooklyn, a collaborative space in Red Hook, which targets people in the design and architecture industries. There’s also AgTechX, a coworking lab for people in agriculture and technology and Brooklyn Shoe Space for shoemakers, which offers not only space to work, but equipment and material.

Kettlespace, which transforms restaurants and hotels into coworking spaces during the day, has two locations in Brooklyn and eight in Manhattan. Andrew Levy, one of the co-founders, said that his company is there to capture the overflow from Starbucks and other coffee shops, and caters to freelancers as well as corporate workers on the move.

“The biggest thing that has informed how we think about Manhattan vs. Brooklyn is less about the real estate and more about the differences in demographic, with Brooklyn in particular having a uniquely high concentration of creative professionals,” he said.

Like Kettlespace, the trend of flexible space, has many variations. It’s also attractive to landlords, small business owners, or organizations that have New York-priced space that lies empty when it’s not serving its primary use—but that can be difficult to pull off.

Brooklyn Boulders, a climbing gym, allocates space at its Gowanus warehouse for coworking, design firm A/D/O manages a shared workspace for designers in Greenpoint, and Giocare Play Spot, a childcare center in South Slope, transforms into a moms-only workspace twice a week.

“As a neighborhood in Brooklyn, Greenpoint’s history is rooted in design and manufacturing. It is our hope to help preserve and promote this,” A/D/O, which occupies 23,000 square feet at 29 Norman Avenue, said in a statement.

Operating a space is not right for everyone. St. Lydia’s, a church in Boerum Hill, has  hosted a coworking space for the public for five years, but has recently voted to close it down, according to the pastor, Reverend Elsa Marty.

“It’s just that the coworking market is really saturated and you have to do a lot more to compete,” she said. They’ll put their limited resources towards renting out the space for events instead.

For a while, a yoga studio in Greenpoint, called New Love City, ran a coworking space alongside its yoga offering, hoping to provide a community space, but discontinued it after two years.  “It got to be too much,” Jennifer Jones, the founder, said in an email, “so we decided to just do the yoga bit.”

For landlords, coworking can be a great opportunity, said Chris Havens, a broker with TerraCRG. “It’s a good way to jumpstart a building,” he said. Havens represented BFC Partners, in a deal with coworking space Ignitia Office, which leases 17,000 square feet at BFC’s 150,000-square-foot building at 1000 Dean Street.

Havens said he tells landlords that even if a coworking space folds in a short time, once a space is set up for coworking, it will be in high demand. “People would jump all over that if it’s big enough,” he said.

While Brooklyn’s coworking scene is eclectic, the giants still dominate the most obvious business centers, like Dumbo and Downtown Brooklyn. WeWork, Regus and Spaces have leases in those areas, and they’re in high demand, said Whitten Morris, who runs the Brooklyn office for Newmark Knight Frank.

“In Dumbo and in Downtown Brooklyn, the Borough Hall area, the coworking companies are pretty much 100 percent full and there’s a waiting list to get in the space,” he said. “They’re jammed full.”

Granit Gjonbalaj, WeWork’s chief real estate officer told CO that the company has seen tremendous demand in Brooklyn since they arrived in 2015. WeWork has five locations in the borough, including 220,000 square feet at Dock 72, its outpost in the Brooklyn Navy Yard.

Nevertheless, the national chains don’t dominate in Brooklyn to the same degree as in Manhattan, and they continue to differentiate from the independent coworking spaces. In fact, a spokeswoman for Knotel told CO the company was not looking to expand in Brooklyn. And both WeWork and Knotel have shed the term coworking, for the less cozy sounding shared office or flex office space provider, to describe their companies.

“It’s important to note we are not a coworking space, like WeWork,” Knotel told Built in NY in 2017.

But WeWork, which has rebranded as The We Company, has largely pivoted to managing space for small to midsize companies.

Havens said there’s one more factor to keep in mind. “The creative industry is super female,” he said. And coworking, with its ethos of sharing, community and professional services, is very much in line with a female-dominated culture.

If the future is female, it looks something likes Brooklyn.