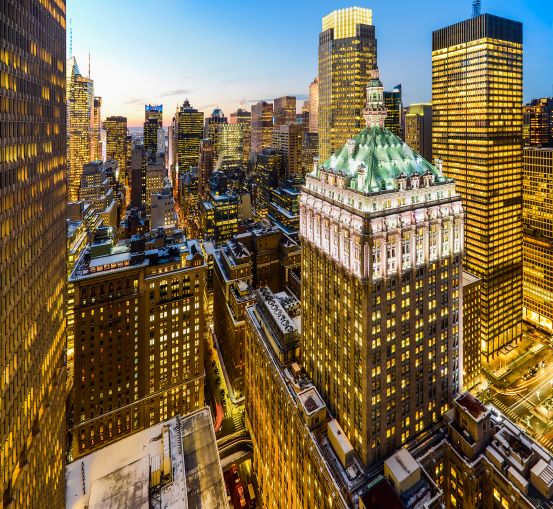 RXR Realty has inked 108,000 square feet of new transactions in the Helmsley Building at 230 Park Avenue in Midtown East, including a major expansion for coworking operator Spaces.

Spaces, which is owned by IWG plc (formerly Regus), signed a 15-year lease to grow its presence by 53,000 square feet on the second and fifth floors of the 34-story building, according to an RXR spokeswoman. RXR has also given the coworking firm a new private lobby on Vanderbilt Avenue. The shared office space provider currently occupies 55,000 square feet on the 10th floor. Its predecessor, Regus, has rented space in the building since 2000, according to information from CoStar Group.

It’s not the first big deal for Spaces this week. The company leased nearly 84,000 square feet at 31 Penn Plaza, as Commercial Observer reported on Tuesday.

Other new transactions at the Helmsley include a 16,000-square-foot expansion and renewal for Hunt Real Estate Capital, the lending arm of El Paso, Tex.-based developer Hunt Companies. The financing firm will grow from 28,000 square feet on part of the ninth and the entire 19th floor to 44,000 square feet on the entire 19th and 20th floors. It first signed a six-year lease in 2014 that was scheduled to expire in 2020. The company’s new deal is for 10 years.

In addition, Onyx Renewable Partners took 9,000 square feet of a prebuilt space on the eighth floor. On the ground floor, Sweetgreen leased 3,300 square feet of retail on the Vanderbilt Avenue side of the building. The New York Post first reported on the leases. Asking rents in the building range from the mid-$70s to the mid-$90s per square foot.

RXR’s Jordan Berger represented the landlord in-house in the transactions with Spaces, Hunt and Onyx. Mike O’Neill of Cushman & Wakefield handled the landlord side for the retail deal. JLL’s Jim Wenk and Kirill Azovtsev represented Spaces.

“Spaces increased its presence at the famed Helmsley Building because of its tremendous success in the lease up of its initial envelope of the space,” Wenk said. “The center opened less than a year ago and is already 100 percent occupied.”

Spokespeople CBRE and Savills Studley didn’t immediately respond a request for comment, nor did the SCG brokers. A C&W spokesman declined to comment on the retail transaction.

“We saw a tremendous amount of leasing activity at the end of the year across the RXR Portfolio, but in particular at 230 Park Avenue,” said William Elder, an executive vice president and managing director of RXR’s New York City division. “This speaks volumes to the asset’s unparalleled location, recently completed modern infrastructure improvements, ownership approach and in-building retail, dining, and amenity options.”