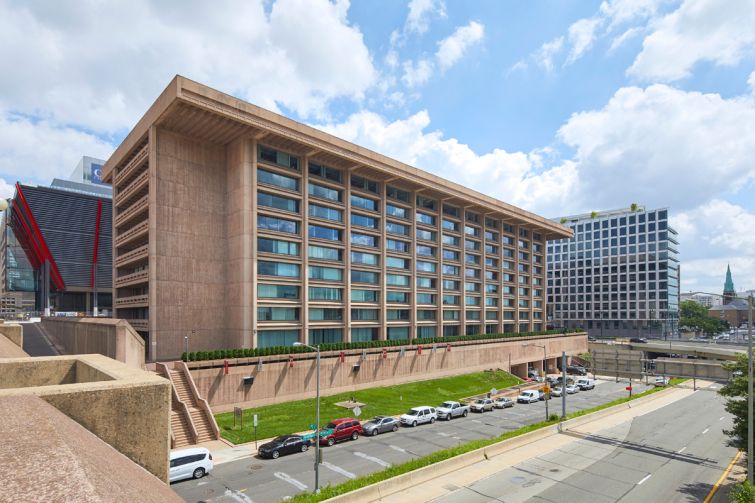 The $90 million 950 L’Enfant Plaza loan was once part of the MSC 2007-HQ11 transaction. It was transferred to special servicer C-III Asset Management in April 2016 due to imminent default, and subsequently experienced a maturity default in December 2016. Normandy acquired the defaulted CMBS note collateralized by the 280,000-square-foot asset—part of the four-building L’Enfant Plaza complex— in March 2018, quickly completing a foreclosure that had been started by the CMBS trust.

Following the acquisition of the note, Normandy was the winning bidder at its foreclosure auction with a credit bid of $39.5 million in June 2018.

The CMBS trust liquidation price for the note was $80.4 million, per Trepp data, with Normandy’s total acquisition costs coming to approximately $84 million with closing costs and fees.

Because Normandy initially acquired the defaulted note and not the asset itself, its access to the physical property was restricted until June 2018 when foreclosure was completed.

At the time of acquisition, Normandy faced the possibility of previous borrower bankruptcy risk—common in defaulted note purchases—and also significant rollover risk from two unsigned tenants; the Federal Aviation Administration and the Department of Homeland Security. The two tenants accounted for approximately 50 percent of the building and both leases were due to expire in October 2018.

But Normandy acquired title to the property, thereby mitigating bankruptcy risk, and subsequently extended the FAA and DHS leases (for 99,585 square feet and 41,697 square feet, respectively), allowing for the Citizens refinance to take place. The bank closed a  65 percent loan-to-value first mortgage loan on the property in December 2018.

The acquisition marks the latest of several distressed debt opportunities that Normandy has identified and capitalized on in the Greater Washington area. In 2017, Normandy acquired Dulles Executive Plaza I & II, in Herndon, Va. and in 2014, it closed on the 184,000 square foot Fair Oaks Plaza in Fairfax, Va. and Reston Metro Center I & II in Reston, Va.

The I.M. Pei-designed structure was built in 1967. The development was named for Pierre Charles L’Enfant, the French military engineer who planned D.C.’s original street grid in 1791.

“We are thrilled to acquire this iconic building, which offers a compelling value proposition to prospective tenants with direct connectivity to L’Enfant Plaza Metro station, unobstructed views to the south, and close proximity to the Wharf,”  Normandy Real Estate Partners Principal Patrick Keeley said at the time of the note acquisition. “This investment adds to Normandy’s growing portfolio in the D.C. Metro market, where in the last four years, we’ve purchased approximately 2.5 million square feet of office properties, which include the National Press Building, 1015 18th Street Northwest, and 950 L’Enfant Plaza.”

In addition to the lease-up of the remaining space at 950 L’Enfant Plaza, Normandy is embarking on an interior and exterior capital improvement plan at the property to enhance common areas and better connect the asset with the plaza retail level at L’Enfant Plaza itself; the International Spy Museum, set to open May 11 at 700 L’Enfant Plaza; and the Wharf, the $2 billion, world-class waterfront entertainment and dining hub and increasingly popular hot-spot on the Potomac River—only a three-minute walk away.  The building also boasts unobstructed views of the Potomac River and the Wharf to the south that are protected by Benjamin Banneker Park, a national memorial park located directly south of the property.