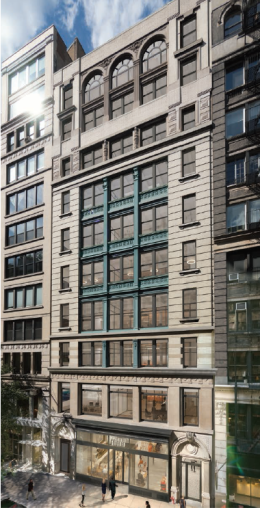 Coworking giant WeWork is continuing its rapid expansion in Manhattan by taking another 106,320 square feet, including an entire 11-story office building in Greenwich Village, Commercial Observer has learned.

In the larger deal, WeWork signed a 15-year lease for the entire 61,375-square-foot 57 East 11th Street between Broadway and University Place, according to JLL, which brokered the deal for landlord Winter Properties.

“We saw so much demand from tenants looking for anything from a single floor to the entire building that we could have leased 57 East 11th Street several times over,” Alexander Chudnoff, a vice chairman at JLL, said in a statement. “The strong interest allowed us to achieve a maximum result for ownership.”

Chudnoff handled the deal for the landlord with JLL colleagues Jonathan Fanuzzi and Kip Orban along with Winter Properties’ Jay Stark and Scott Milsom. Bruce Mosler and Ethan Silverstein of Cushman & Wakefield represented WeWork in the deal. A spokeswoman for C&W decline to comment.

WeWork also recently signed a lease for 44,945 square feet in Epic’s 148 Lafayette Street between Howard and Grand Streets, according to a WeWork spokesman. The company will take the third through seventh floors to open a WeWork location in the first half of 2019.

The WeWork spokesman would not provide the terms of the deal, but CoStar Group data lists average asking rents in the building as between $70 and $85 per square foot.

David Falk, Daniel Levine and Jason Greenstein of Newmark Knight Frank handled the deal for the landlord and it’s unclear who represented WeWork. The NKF brokers declined to comment.

The U.K.-based company has more than 6.7 million square feet of office, retail, residential and logistics distribution properties in the U.K., U.S. and Europe, according to its website.