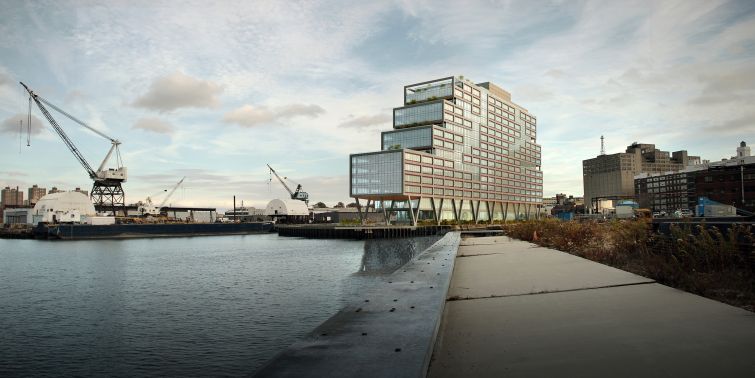 WeWork has tapped Colliers International to lease out its 220,000 square feet of coworking space at Rudin Development’s and Boston Properties’ Dock 72 office building in the Brooklyn Navy Yard, Commercial Observer can first report.

WeWork will occupy six floors of the 16-story, 675,000-square-foot building ALONG the waterfront at 63 Flushing Avenue. The coworking giant will program most of the amenity spaces, including a 15,000-square-foot WeRise gym, an outdoor basketball court, food hall, coffee shop and rooftop conference center. The under-construction project is expected to open by next summer.

Koltis said that his team was planning “innovative tours and events” to draw people to Dock 72, which is a 15-minute walk from the closest subway station in Dumbo. He expects to draw “mostly [tech, advertising, media and information]-type users. We think it’s going to be mostly headquarters for more creative and incubator-type companies. You can have amenities in this building and have expansive views but also create your own community in this kind of environment.”

He added that he expects to work with residential and commercial brokers, because residential brokers are often familiar with small commercial tenants in the outer boroughs. For example, he said, “There are a number of smaller architecture firms that work out of Brooklyn that aren’t going out and hiring a traditional commercial office broker.”

“I got to know David Amsterdam and Ted through networking and saw a lot of synergies with how Colliers approaches real estate,” said “They’re very innovative and have a lot of energy.”