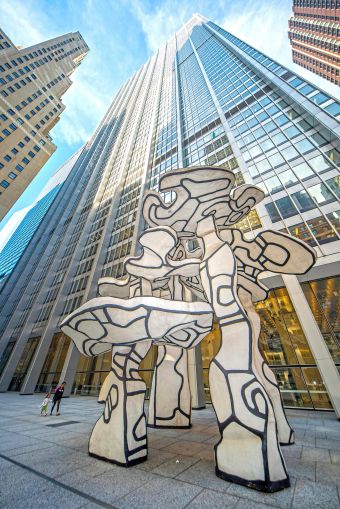 London Stock Exchange has leased 75,000 square feet at 28 Liberty Street at William Street in Lower Manhattan, where it will consolidate its operations from multiple locations around Manhattan.

The stock exchange, also known as LSEG, on Oct. 4 signed a “long-term” lease for the entire 57th and 58th floors, per a press release from Fosun Hive Holdings, the property investment and management platform for landlord Fosun International. Per a spokesman for JLL, the lease is for 12 years and the asking rent was $75 per square foot.

“Lower Manhattan was an ideal location for the London Stock Exchange, placing one of the oldest stock exchanges in the world within the heart of the Financial District,” JLL’s Peter Riguardi said in prepared remarks. “Fosun’s comprehensive $180 million redevelopment of 28 Liberty Street created a dynamic environment that is perfect for world-class organizations such as the LSEG.”

The Real Deal, which first reported on the deal, noted that the move to the building, originally known as One Chase Manhattan Plaza, will put the LSEG just a few blocks away from the headquarters of the New York Stock Exchange. LSEG will move in in 2019, “in two stages as the delivery dates are different for each floor,” the JLL spokesman indicated.

Fosun International purchased the tower for $725 million in 2013, as Commercial Observer previously reported. Other tenants at the 60-story, 2.2-million-square-foot Class-A office tower include JLL (its Downtown offices), travel website Booking.com, flexible workspace provider Serendipity Labs (in partnership with Chinese giant Ucommune) and Union Square Hospitality Group’s Manhatta restaurant (in which Fosun is an investor) on the 60th floor.

Update: This story has been edited to include lease details from JLL.