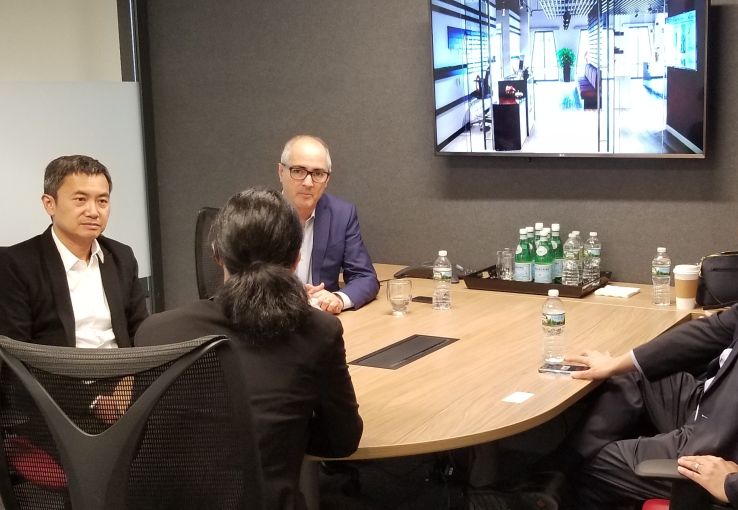 About eight years into the coworking phenomenon in the Big Apple, Chinese giant Ucommune opened its first outlet in the city at 28 Liberty Street via a partnership with Rye, N.Y.-based flexible workspace provider Serendipity Labs.

And the founder of the Chinese company isn’t scared off by the competition.

“Definitely the competition is there. [But] I think good competition is a good thing [for] companies to modify their products and to improve the service,” Mao Daqing, the founder of Ucommune, told Commercial Observer during a tour of the new Financial District coworking location today. “If the industry has no competition, then I think it’s horrible.”

Daqing added that he believes coworking as an industry is still in its infancy. He believes that even more tenants will choose shared offices over traditional leases, and that will create opportunities for growth.

“I feel this industry is very young,” Daqing said. “In the future, I think this is going to be a new style of working. It’s not just a physical office, it’s a new culture.”

Since its launch three years ago, Ucommune—formerly known as UrWork—has become the biggest coworking company in China with more than 140 locations. It’s now valued at $1.7 billion and has roughly 7,000 members.

Serendipity Labs, which has 125 locations across the country under development and 11 active ones (including a new one in Los Angeles, as per CO), holds the lease at 28 Liberty Street, with Ucommune as an investor. The foreign company chose to pump money into the 28 Liberty Street outpost because it will provide a convenient work space for Chinese business owners traveling to New York City.

“There is a lot of Chinese companies that come here,” Daqing said. “So we wanted to [have] some service for them and our members in China.”

Members of Ucommune in China can use their app to book space at the Serendipity Labs FiDi location when they are in New York City. And Daqing added that he’s had discussions with Serendipity Labs about another location in Gotham. But he’s just poking around right now.