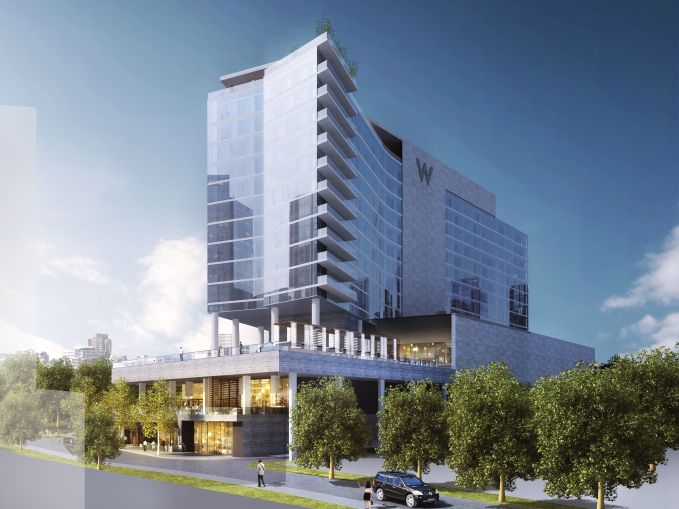 A rendering of the W Hotel Nashville. Courtesy: HKS, Inc.

Goldman Sachs and Lionheart Strategic Management, a subordinate financing vehicle led by Winston Fisher, have provided a joint venture with $133 million in senior and mezzanine financing for the ground-up construction of a Marriott International W-branded hotel in Nashville, Tenn., according to Lionheart.

The debt has a three-year term, according to information from Lionheart, and the mezzanine piece totals $19.2 million. The deal closed on September 13.

Chicago-based Magellan Development, along with Nashville-based real estate investment firm Corner Partnership and also Hospitality Gaming Advisors, have teamed to develop the $190 million, 346-key hotel. It’s expected to open in the fall of 2020, according to a June report from The Tennessean.

“We put a few feelers out early and just weren’t getting the leverage [we wanted],” Dave Tessier, the president of Hospitality Gaming Advisors, told Commercial Observer. Tessier said many of the banks that were considered for the financing had balance sheets that were chock full of hotels and were offering much lower leverage than was desired.

“They had a lot on the books, and they needed it to fall off,” Tessier explained. “We were seeing 60 to 65 percent, and Goldman was willing to go 67 to 68 percent, but we got to 70 [percent]. Lionheart came in aggressively as they wanted to get into the space; they liked the project.”

In addition to the construction debt and also sponsor equity from the development trio, the joint venture raised over $30 million in equity from UBS private wealth management and a pool of its ultra-high-net worth clients, said Tessier.

Tessier said the joint venture will look to refinance the property after a year of operation. “We’d look at riding through the first year of operation and then getting a conventional loan, but it would probably be CMBS if we get a good ramp up,” Tessier said.

A project management official at Magellan did not respond to an inquiry. Corner Partnership could not immediately be reached.

Fisher, a chairman of Lionheart Strategic Management, said in a statement that the firm seeks to lend to strong sponsorship on transitional assets and ground-up construction projects, which he said “makes this project an ideal fit for us. The new W Hotel will be a great addition to the Gulch, one of the most vibrant and sought-after neighborhoods in Nashville.”

The planned 16-story hotel will be located at 12th Avenue South and Pine Street in The Gulch neighborhood of Nashville. Dallas-based architect HKS, Inc. designed the project.

“All the preparations, agreements, and the partnership with Marriott are in place,” Mark Bloom, a partner and investor within Corner Partnership, told The Tennessean in June. “We’re rolling. We’re trying to get out there with the best possible hotel in the city and something extremely special.”

A spokesman for Goldman Sachs did not immediately respond to an inquiry.