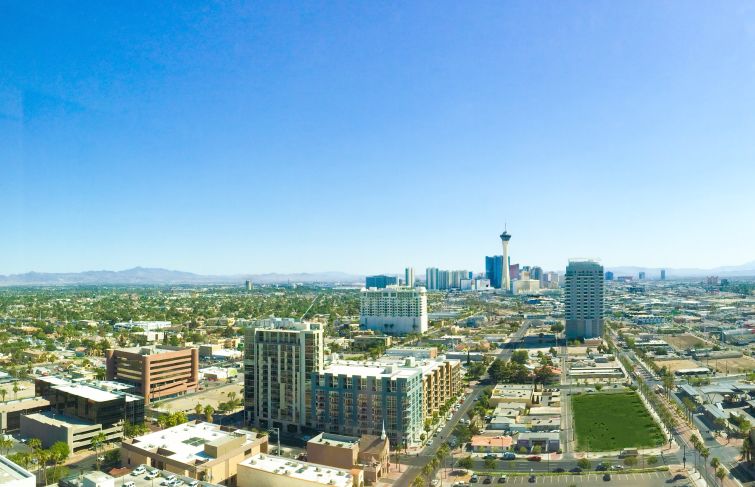 Las Vegas-based Moonwater Capital has secured a $103.8 million financing package to fund its purchase of equity interests in seven buildings in the Nevada city, according to Dekel Capital, which brokered the financing.

The deal includes an $82.8 million floating-rate senior loan from Prime Finance, a private lender with offices in New York City, Chicago and San Francisco. The balance comes in the form of a $21 million equity investment from a publicly traded real estate investment trust that a spokeswoman for Dekel declined to identify. The proceeds will fund Moonwater’s acquisition of mixed-use real estate and lease-up costs for the 40 percent of the portfolio that is currently vacant.

Moonwater walks away from the deal with partial ownership of seven different buildings in Las Vegas’ southern and western purlieus, interests that add to 444,200 square feet. The largest swath will be a 133,400-square-foot commercial condominium at Town Square, a mixed-use development at 6605 Las Vegas Boulevard South that combines office space with dining, entertainment and residential sections. The price tag on Moonwater’s purchase wasn’t divulged, but the seller in the deal, Dornin Investment Group, itself bought the condominium space for $12 million in January, the Las Vegas Review-Journal reported.

The balance of Moonwater’s acquisition is made of up whole-building purchases at five lots in the city’s up-and-coming Summerlin district. Tenants in the office space purchased by Moonwater include travel website Expedia, timeshare developer Diamond Resorts and Chamberlain School of Nursing, a for-profit school that offers classroom-based and online healthcare degrees.

A slew of new office jobs in Las Vegas has spurred on the city’s office market this year, with 835,000 square feet of net absorption in the last twelve months, according to data from Colliers. Financial firms, health care providers and business-services companies led the charge, and the neighborhoods where Moonwater’s acquisitions are located saw the most aggressive leasing activity.

Across the entire municipality, strong supply growth meant that vacancies remained high by big-city standards, declining to 15.1 percent from 16 percent halfway through 2017. But the market is much tighter in the city’s southwestern neighborhood, especially for Class-A buildings, according to Shlomi Ronen, Dekel’s founder.

“You have some really old crappy buildings in that 15 percent [vacancy] number—some of which still have owners that aren’t able to transact,” Ronen said. “If there’s a tenant that’s looking for Class-A space, that market is very very tight.”

Asking rents for class A offices are about $32.16 per square foot in the city, according to the Colliers data. John Brayshaw, a New York City-based co-founder of Prime Finance, didn’t immediately respond to a voicemail, and Ofir Hagay, CEO for Moonwater Capital, wasn’t available either.