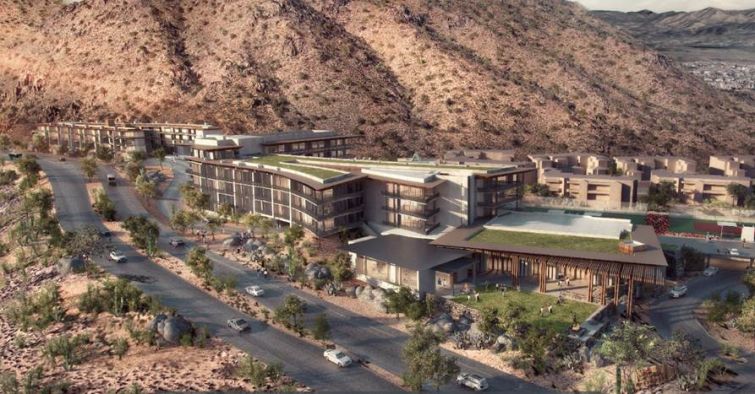 Hall Structured Finance, a Dallas-based private real estate lender, has provided $53 million in debt to fund the redevelopment of a resort near Scottsdale, Ariz., the company announced yesterday.

The money will allow the property’s owner, entrepreneur Bill Hinz, to expand what is currently a 32-room hotel called CopperWynd Resort into a 177-room lodging that will be branded as part of the Marriott Autograph Collection. HSF’s loan, a three-year deal with three one-year extension options, carries an interest rate of Libor plus 8.95 percent, according to Malcolm Davies, a managing director at George Smith Partners who arranged the financing.

Construction at the property, at 13225 North Eagle Ridge Drive 20 miles northeast of downtown Phoenix, is set to kick off in the coming months with completion planned by the end of 2019.

Davies said that the resort’s precise location on the outskirts of Scottsdale in the town of Fountain Hills, Ariz. made it possible to gain the local approvals necessary to proceed.

“It’s an extremely unique property, on a ridge line, and it’s almost impossible to capture the entitlements that Bill got,” Davies said. “In Scottsdale, it’s tough to get entitlements. Entitlements [for the CopperWynd project] were given by Fountain Hills, but it has a Scottsdale address.”

Despite the fact that Hinz is an independent owner without the weight of a big property company behind his name, the project checked all the right boxes for HSF, according to its president, Mike Jaynes.

“This project combined many of the key factors that we look for in a deal, including great location and demand generators, a strong hotel flag, a trusted development team and, in this case, an existing set of attractive amenities,” Jaynes said in a statement.

Those features include a spa, a 26,000-square-foot lobby and athletic facilities including a gym, two swimming pools and tennis courts. The hotel’s restaurant, Flourish, has won an award for the best views in Arizona for its prospect of the McDowell Mountains.

Hinz praised HSF for recognizing the value in what he described as an important regional endeavor.

“The transformation of this small boutique property into a world-class destination resort that will be part of Marriott’s Autograph Collection is a once in a lifetime opportunity for our community and the state of Arizona,” Hinz said in prepared remarks. “HALL Structured Finance recognized its importance and worked closely with us to tailor the loan terms to this unique project so that we could get started.”

Scottsdale’s lodging market grew by 715 hotel rooms over the last ten years, according to the city’s government. Average occupancy was 68 percent in 2016, the most recent year for which data were available, with travelers paying a mean room rate of $188. Revenue peaks in the spring as the city earns about 40 percent of its hotel tax revenues during March, April and May. Earnings fall dramatically over the summer when tourists aim to avoid the area’s blistering desert temperatures.