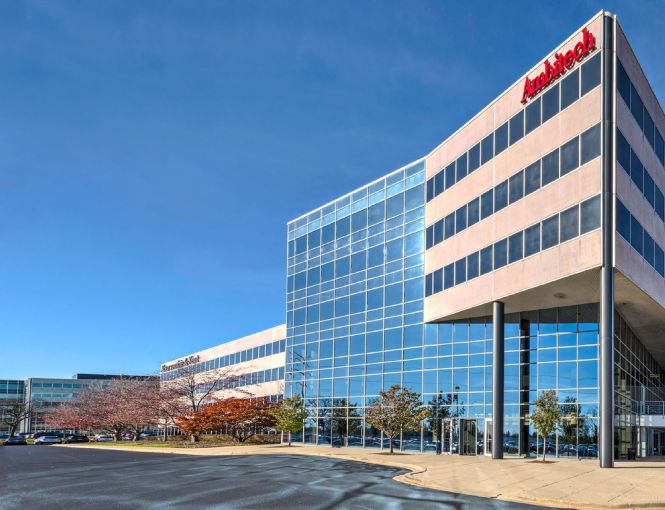 One of the Executive Towers West buildings. Photo: JLL

Morgan Stanley has lent $63 million to a private real estate investor towards its purchase of an office complex in suburban Chicago, Commercial Observer can exclusively report.

Group RMC, a property owner with a portfolio of commercial properties spanning eight U.S. states as well as Canada, sought the debt for its acquisition of Executive Towers West, a three-building development 20 miles west of the Windy City in Downers Grove, Ill. The buyer, based on the 83rd floor of One World Trade Center in Lower Manhattan, engaged JLL to broker the ten-year, fixed rate Morgan Stanley loan. Adam Schwartz, Brett Rosenberg and Patrick Heitmann led the deal team that found financing for the trio of buildings, which stand at 1400, 1411 and 1431 Opus Place, near the junction of Interstate 88 and Interstate 355.

Chicago’s suburban office market has suffered in recent years as tenants bowed to demographic pressure to trek back to more metropolitan climes. In June, seeking to attract more millennials to its workforce ranks, McDonald’s moved its nerve center back to the city’s downtown—site of its original headquarters—after 47 years based on a suburban campus in Oak Brook, Ill., a leafy enclave close to Downers Grove. Walgreens, long based in the Illinois town of Deerfield, Ill., similarly announced this year it would shift 1,800 jobs to new digs in the city center at the Old Chicago Main Post Office. Research from JLL shows that dozens, if not hundreds, of lesser-known firms have followed suit.

Revenues at some suburban office properties nearby have withered as a result. As per data from Trepp, downtown Chicago hosts 173 properties that back CMBS loans, only one of which is distressed. In the city’s suburbs—which, by contrast, are home to many fewer securitized assets—as many as a dozen CMBS deals have gone underwater. Indeed, seven properties worth a total of $126 million back non-performing CMBS debt within a five-mile radius of Downers Grove alone.

Still, Group RMC, which owns about 13 million square feet of office space across its entire portfolio, hasn’t been deterred from the submarket: the Executive Towers West purchase represents its fourth acquisition in the region outside Chicago’s city limits this year. (The company did not immediately respond to requests for comment.)

Schwartz said that despite the market’s retreat, Group RMC has been able to single out properties that buck the negative trend.

A spokesman for Morgan Stanley said that the bank does not like to comment on particular transactions.