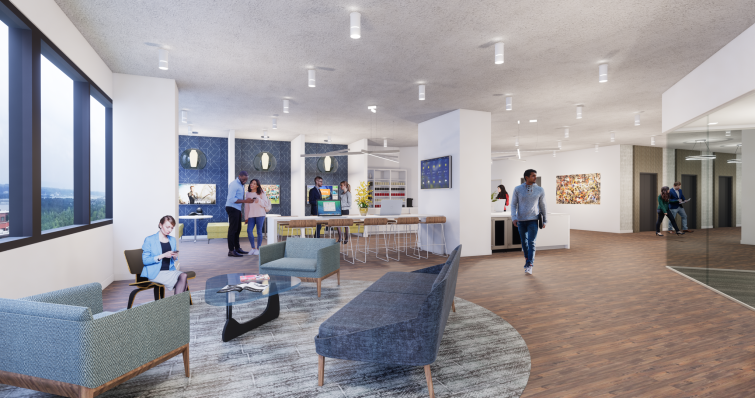 The Washington Real Estate Investment Trust (WashREIT) has launched a new program for tenants who want shorter leases and opportunities to move into offices quickly, according to a press release from the D.C.-based developer. The firm is targeting federal government contractors that could benefit from the recent approval of increases in federal spending.

The developer’s portfolio includes 49 properties comprised of 6.1 million square feet in the D.C. region. The new flexible program, called Space+, currently offers 96,000 square feet in 32 spaces across 12 buildings, according to the release.

The program offers a range of spaces from private single suites to collaborative offices with shared amenities, per the release. Companies are able to move into fully furnished offices as quickly as 24 hours after signing the lease or as few as 10 days for customized spaces.

In Space+’s pipeline, there is an additional 60,000 square feet across 15 buildings that will deliver in the next six to eight months, including two floors at the forthcoming Arlington Tower in the Rosslyn area of Virginia. The building is constructed so that “every tenant will have the best view or access to the best view,” Chang said, explaining that the market has historically “taken the worst spaces in buildings—with bad or no views” to create spec suites but WashREIT is making the investment with some of the best buildings in its portfolio.

The firm is strategically launching the program at this time based on research that it conducted with the Congressional Quarterly. After reviewing the federal government’s recent budget act, they found that D.C.-area contractors could receive an additional $28 billion worth of projects, according to Chang.

The D.C. market is becoming saturated with co-working firms that offer private and collaborate spaces such as WeWork, which recently announced an expansion in the region to the campus of University of Maryland in College Park, as CO previously reported.

In response to WashREIT’s new model, Mindspace CEO and founder Dan Zakai told CO that he understands that the rising demand for coworking spaces is tied to “the need for flexible, seamless and reliable accommodations for a variety of businesses, regardless of industry or size.” He touted Mindspace’s model as one that is “designed to reflect the practical realities of growing a company in today’s environment, with month-to-month leases, 24/7 access and membership to locations throughout the world.”

Mindspace, a global co-working network, also recently launched a platform that lets brokers who are signing Mindspace tenants easily register and track referrals, earn commission and streamline all of their data in one place, as CO also reported.

Chang said that while Space+’s offerings are similar to those of popular co-working companies, he doesn’t see them as competition. He said those companies have great brands and operating models but WashREIT’s options are better for companies who want to “graduate and control their own brand and culture.”

“I’ve heard from a lot of tenants that they don’t see themselves in a WeWork with beer taps and cold brew—those are the clients that we want to appeal to.”