WeWork Has Entered the World of Retail [Updated] 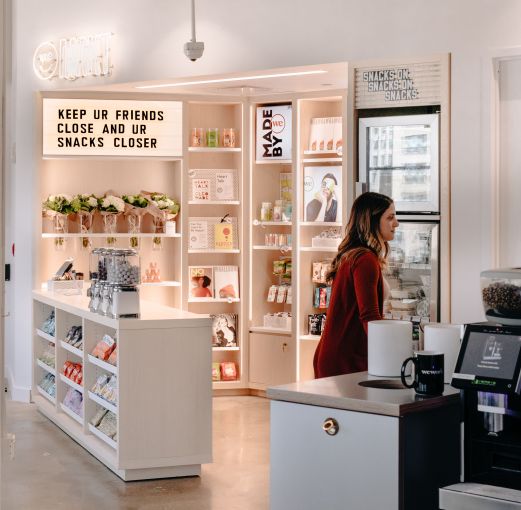 It was not a question of if, but when. And that “when” is now.

Selling curated products created by WeWork members, WeMrkt’s first location is on the seventh floor at a WeWork location at 205 Hudson Street. As Commercial Observer reported in March 2017, WeWork leased nearly 95,000 square feet on the entire fifth, sixth and seventh floors of the building between Watts and Debrosses Streets. More New York City WeMrkt locations are to come, followed by others around the country.

The retail space at 205 Hudson Street features “many products made by WeWork members, including healthy snacks, office necessities, and branded apparel,” as per a WeWork press release. WeMrkt is only accessible to We Work members, employees and their guests, a company spokesman indicated.

A reimagined version of WeWork’s original Honesty Market, WeMrkt is “by our members, for our members,” Julie Rice, WeWork’s chief brand officer, said that in prepared remarks.

“The Honesty Market was the first iteration of our market stands where employees and members could purchase snacks and beverages—most WeWork’s have an Honesty Market within their spaces,” a WeWork spokesman indicated. “The WeMrkt follows a similar model but includes more member products and items outside of just food and beverage, like office supplies and We-branded apparel.”

The store features 10 products chosen from a pitch competition in April. Winners were selected “because they are innovative, have eye-catching packaging, and are backed by a solid business plan, among other criteria,” as per the release. There will be quarterly competitions for new products.

“WeWork will help our members to reach new audiences and customers,” Rice said in a statement. “As brick-and-mortar retail is disappearing, our WeMrkts will offer our members an entirely unique channel of distribution.”

Update: This story has been edited to reflect that WeMrkt is only accessible to We Work members, employees and their guests.