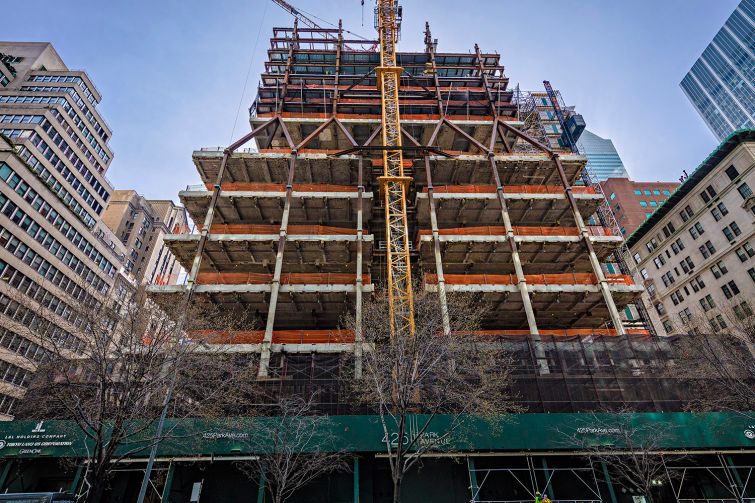 The exterior skeleton of 425 Park Avenue after the demolition of a majority of the building. Photo: Alan Schindler 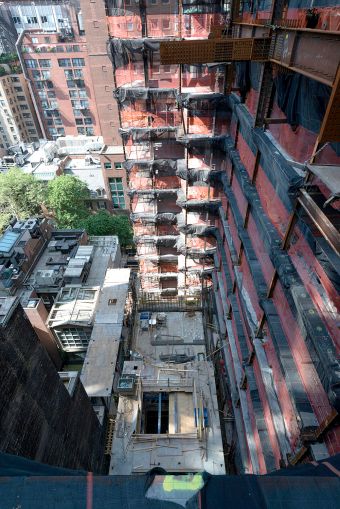 Workers demolished the back portion of the building after removing the 33rd to the 17th floors. Photo: Alan Schindler 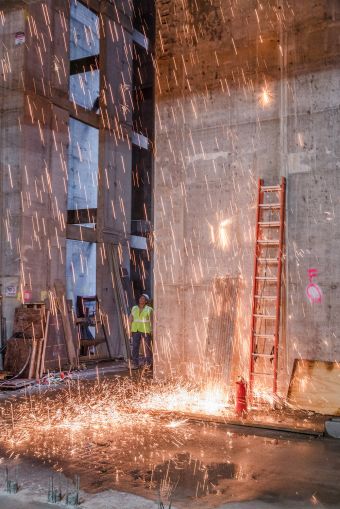 Sparks fly as laborers work on the lobby of the building. Photo: Alan Schindler 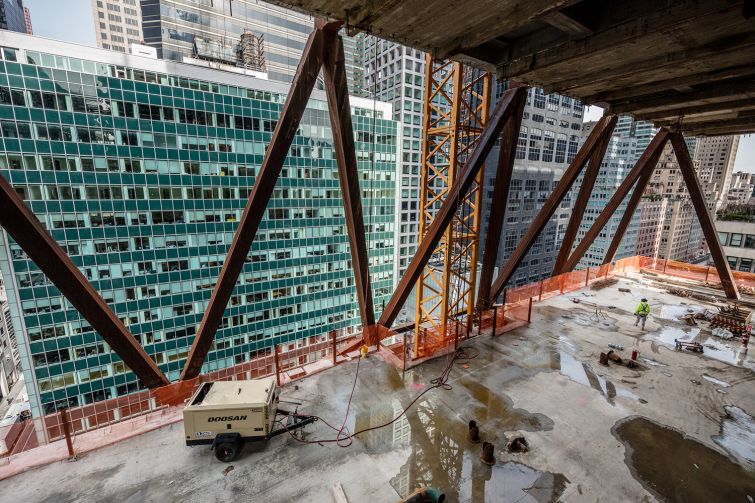 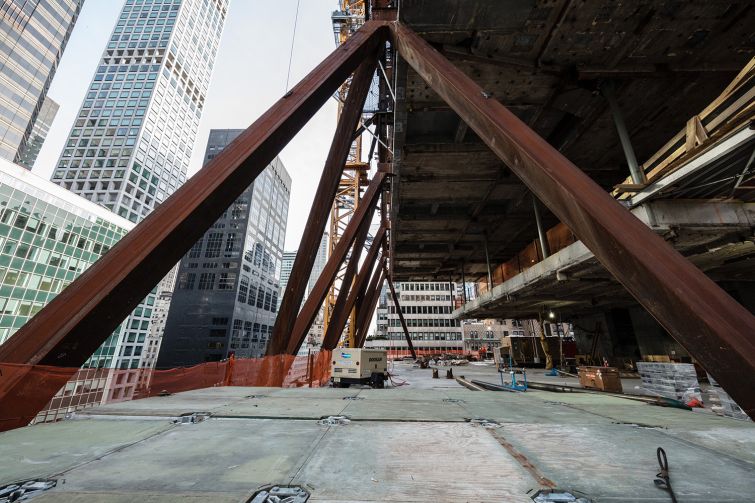 The new steel columns were added to the building as the old was being completed. Photo: Alan Schindler
Previous Next

To build the new 44-story, 670,000-square-foot 425 Park Avenue, L&L Holding planned to tear down the majority of the existing 33-story 1950s building on the site, and reconstruct a new one on top while modernizing the remaining part of the old property. Sounds easy right? But it wasn’t and it gave the developer pause.

So while it already had two engineers on the project, L&L and its general contractor, AECOM Tishman, brought in an additional engineering firm, Zieman Engineering, to figure out the best way to pull off this construction switcheroo without causing a major construction migraine in Midtown.

That resulted in the project being delayed a few months. But Zieman came up with the idea to dismantle the floors one at a time starting at the top, put in temporary steel to brace the structure and then construct the new building.

“This is definitely the most difficult [project of my career] and it’s had the most teamwork by a lot of very good consultants,” William Potts, the vice chairman of capital construction at L&L, said during an interview at the developer’s offices at 142 West 57th Street.

Potts said there were hundreds of changes to aspects of the project during the construction, as the crews would find issues, such as old and damaged columns, and would need to have team meetings to best figure out how to address them.

“Our meetings would last all day. We would have 20-odd people in there,” Potts said. “It’s been that difficult because no one’s ever done this. Everyone was kind of learning on the fly together.”

Since the project began before the Midtown East rezoning in 2015 if L&L had demolished the entire building according to the old rules, it would only be able to construct a 580,000-square-foot tower based on the site’s floor-area ratio and zoning laws. But, as per the previous statute, keeping 25 percent of the original building allows the developer to grandfather the square footage into a new structure. This left L&L with the original 670,000 square feet.

Before crews from Waldorf Demolition tore down each floor, the landlord donated furniture in the building to local firehouses, as a thank you to firefighters who stopped by to check on the condition of the property. Approximately 120 laborers performed the interior demolition and 45 workers did the structural demolition of the floors. Workers first removed glass, and ripped out wood and other combustible materials and dropped those down an elevator shaft that was converted into a debris chute. Afterwards they removed steel columns and concrete slabs from each floor from the 33rd floor to the 18th floor.

Then contractors peeled off the back section of the building from the 17th floor to the sub-basement, and pulled out every other floor slab, making sure to leave 25 percent of the building intact. To prevent the structure from collapsing, they installed more than 740 tons of temporary steel braces.

During the demolition, AECOM also inserted vibration monitors in nearby buildings and in the Amtrak tunnels below to ensure the work didn’t affect the surrounding structures. (The monitors didn’t register any large readings at any time during the process, Potts said.)

Currently, Waldorf workers are completing demolition in the basement and AECOM’s contractors are building the new structure. The building is expected to be completed at the end of 2019.

When it’s finished, the new 425 Park Avenue will feature a lobby with 45-foot ceilings and the penthouse will have staggering 38-foot ceiling heights in some areas.