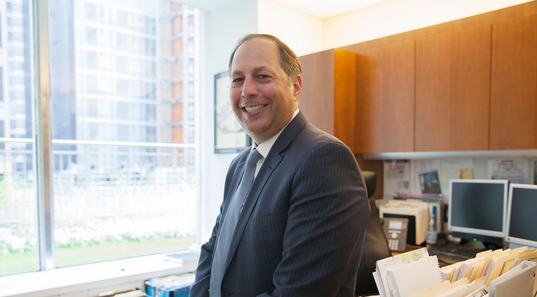 Gene Spiegelman has left Cushman & Wakefield after nearly two decades to become a principal and vice chairman at Ripco Real Estate, the firm announced. Spiegelman was a vice chairman and head of retail services in North America at C&W until starting at Ripco today in the firm’s Manhattan office.

“I had a fabulous run there,” Spiegelman told Commercial Observer. “I think that I’ve reached a personal threshold in my life. The business is changing around me and I wanted the opportunity to partner and collaborate with people. I wanted the opportunity to grow something organically… It was time to pursue the market more entrepreneurially. Ripco has always had a strong relationship with tenants.”

Over the last 18 years at C&W, Spiegelman won the Real Estate Board of New York‘s Retail Deal of the Year Award twice—in 2001 for executing a 48,000-square-foot lease for Crate and Barrel at the Cable Building at 611 Broadway and in 2008, when he represented Gucci in a 25,000-square-foot lease to Diesel at 685 Fifth Avenue. Spiegelman was at Edward S. Gordon Company (which eventually became part of CBRE) from 1993 to 1999 and then at Retail Development Partners, at which he was a partner, from 1999 until it sold to C&W in 2000.

Most recently, Spiegelman renewed AMC Theatres in 40,000 square feet on two levels at 890 Broadway in December 2017 for 15 years on behalf of landlord Ballet Tech. The tenant is renovating the entire theater, Spiegelman said.

Ripco has been making some notable retail hires this year, with the addition of Geoff Bailey and Beth Rosen, which CO previously reported.

“For Ripco, this is a monumental moment. We are extremely pleased to welcome Gene to Ripco as our partner,” Ripco Co-Founders Peter Ripka and Todd Cooper said in the release.

A C&W spokesman emailed the following statement: “We can confirm that today was Gene’s last day at the firm. He’s leaving to pursue an ownership stake at a boutique retail firm. We wish him the best of luck in his future endeavors.”