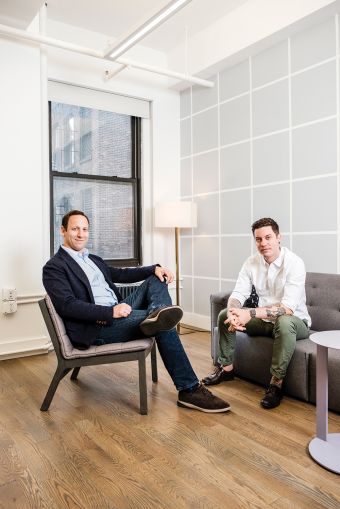 IN THE NEXT BREATH: Breather co-Founder and CEO Julien Smith, right, and Hank Jonap, the director of real estate transactions and construction at the company, are responding to clients’ demands for longer-term space by offering office spaces for as long as a year with an option to renew. Photo: Chris Sorenson/for Commercial Observer

WeWork, Knotel and Convene, watch out: There is a new competitor nipping at your heels.

Having had success with its on-demand short-term meeting-space business, Breather recently launched a “longer-term” office rental option, which the company CEO defined as space for “a headquarters, a satellite office or a spillover-office-space solution.”

“This is a relatively new shift in our client portfolio that’s growing exponentially month-over-month,” the CEO and co-Founder Julien Smith told Commercial Observer in a Breather space in the Flatiron District. “This offering was born out of conversations with our clients who were in need of longer-term solutions beyond the hour-long or multiday meeting space.”

Tom Sleigh, the director of real estate strategy and partnerships at Breather, said that it was “inevitable” that people would want to use Breather’s spaces—which have often been used for one-off meetings and events—for a longer duration of time. From an operational standpoint, he noted, it “is actually not a big deal.”

The company’s longest agreement with a client as of today is one year with an option to renew.

Breather, launched in 2013 in Montreal and a year later in New York City, is in more than 300 buildings across 10 cities—via leases or revenue-sharing agreements with landlords—with more than half a million square feet of space in total. Breather has spaces in London, two Canadian cities—Montreal and Toronto—and seven U.S. cities.

The spaces—which span 150 to 3,200 square feet (although in some cases they can be combined)—have been used by everyone from freelancers to Fortune 500 companies.

As the needs of office tenants have changed, so have their real estate requirements with third-party flexible office space providing an increasingly popular solution. And in an industry that has notoriously been slow to evolve technologically, landlords have been embracing the shared office trend.

Approximately 45 percent of landlords and investors say that “flexibility of use is the most important occupier trend for real estate in 2018,” as per CBRE’s 2018 Global Investor Intentions Survey.

Brian Steinwurtzel, a co-CEO of GFP Real Estate, said that his company sees Breather as a building amenity.

“Our relationship with Breather is [as] landlord and tenant,” Steinwurtzel, said. “But it’s almost like if you have a gym in the building and then the building is going to provide a service to the tenants. The tenant has to pay for it, but it’s nice to have it in the building.”

GFP has 10 to 12 Breather conference rooms in its portfolio of almost 11 million square feet.

The flexible office space market is still in the early stages, but it’s growing.

According to a spring 2018 CBRE report on flexible space solutions in Manhattan, the flexible space sector represents 9.2 millions square feet, or 2.5 percent, of the Manhattan office market and has grown 600 percent since 2009 with 65 different flexible space companies as of first-quarter 2018. Over 900,000 square feet of flexible space was leased in the first quarter of this year alone, the report found.

“We loved that they were furnished and extremely flexible,” said Georgia Flaum, the director of customer support at Candid, which sells clear teeth braces directly to consumers and has been using two neighboring Breather spaces since running out of room at its Union Square headquarters.

Flaum said Candid signed a two-month deal for spaces on two different floors at 215 Park Avenue, adding that the space is “really beautiful and really clean—exactly the vibe we’re going for. [They are] conducive to a calming work space so everyone can be really productive.” (Candid has since found a permanent, larger office it’s moving into on July 2.)

What makes Breather unique is it’s selling private space, not coworking, and it has the ability to offer space for an hour up to several months in all its spaces without a membership fee.

“If you’re at a WeWork, you’re at a shared desk, you’re at an open forum,” said Hank Jonap, the director of real estate transactions and construction at Breather. “When you’re at Breather, you have private space to really focus and be productive. You’re not seeing 20 people go by you to get coffee or make other phone calls. We are the only private [ones]. It’s a distinguisher.”

Smith said, “I think if you get a Knotel, if you get a WeWork, you get one space. And that’s the space that you have. Theoretically, there are a certain number of WeWorks in the city and a certain number of WeWorks globally. When you become a Breather customer, you automatically get access to 500 spaces, and so the access to the network really is the most powerful thing for us.”

On Breather’s expansion into the longer-term office market, Eugene Lee, the global head of real estate and business development at Knotel, said, “While there will always be new players hoping to jump on this opportunity, we’re going to continue hitting milestone after milestone.”

“As the flexible workspace industry matures, companies will emerge to address the needs and preferences of different customer segments, just like brands in the hospitality industry specialize along the spectrum of select to full-service hotels,” said Chris Kelly, the co-founder, president and chief development officer of Convene. (WeWork, the big daddy of coworking, declined to comment.)

Breather wasn’t founded as a competitor to WeWork, its co-founder said.

“For us it wasn’t designed against coworking—I believe coworking is going to be a very substantial part of the market—it was really designed against public space so to speak, like coffee shops and being like, there’s got to be a private option that people can use,” Smith said.

“It’s very easy to get space tomorrow…It’s very hard for a company to say, ‘I’m going to give you a space literally in the next 30 seconds, and I’m going to give it to you from your phone, and there’s not going to be anyone there, and you will just get instant access, and then I will revoke access once your transaction is done.’ ”

Maggie Burns, the vice president of real estate at Breather until she left last October, said that the company is “well positioned to keep growing,” as it’s raised more money and has a real estate presence on its board of directors. (The board of directors includes Smith, RRE Ventures, Valar Ventures, Menlo Ventures and Ivanhoé Cambridge.) But, she added, it will face challenges on the real estate side.

“There’s only so much you can do to fit [a space] to each client” when their bookings vary from six hours for a meeting to six-month headquarters for a headquarters.

“It’s a solvable issue,” she noted. “It’s just a new part of the business.”

If at the end of the day there’s an amenities arms race going on, those companies with a strong technical infrastructure will fare well.

“I think Breather is really the only player at scale doing what we do,” Smith said. “Yes, there are competitors in the flexible office industry, but none of them are truly tech companies, whereas Breather has technology at its core. No one has also built up the depth of a network at our scale and can offer that to clients the way we can.”