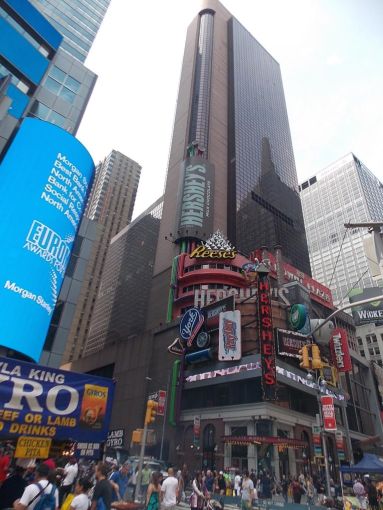 Vornado Realty Trust has refinanced its Crowne Plaza Times Square Hotel at 1601 Broadway with a $250 million loan from Deutsche Bank and Morgan Stanley, according to records filed this morning with the New York City Department of Finance.

The loan consolidates and replaces previous debt from 2014—supplied by the German American Capital Corporation, a Deutsche Bank subsidiary—which at the time included a new roughly $84.7 million gap mortgage; the previous loan totaled $310 million and carried an interest rate at LIBOR plus 2.80 percent with a one-year extension option, and it was set to mature in December 2018, the firm said in a press release in February 2015.

A source familiar with the transaction confirmed the refinance, which closed on April 19, records show. Deutsche Bank declined to comment on the transaction, and Morgan Stanley could not immediately be reached.

In January 2015, soon after the November 2014 refinance from German American, Vornado invested an additional $39 million to increase its ownership interest in the Crowne Plaza Times Square Hotel to 33 percent from 11 percent, buying the stake from City Investment Fund, property records show. Vornado then bought out an undisclosed joint-venture partner for $95 million to acquire a 57 percent, majority stake in the the building, Vornado announced in a February 2015 news release; the transaction valued the property at roughly $480 million.

Built in 1989 and designed by The Alan Lapidus Group, the 46-story, mixed-use skyscraper includes the 795-key Crowne Plaza hotel, 7,700 square feet of retail space, 197,000 square feet of office space and a 159-space parking garage, according to information from Vornado’s website. The property is currently 65 percent leased, according to CoStar.

The American Management Association’s Executive Conference Center—New York’s largest conference center—is on the sixth floor; in all, AMA holds 88,066 square feet across floors six through eight. Learning Tree International is housed in 25,000 square feet, New York Sports Club holds 28,418 square feet at the base of the building, and the Hershey Company is situated in 7,000 square feet of retail space at the building’s street level.

Roughly 3,700 square feet of street-level retail space as well as close to 78,000 square feet of office space from floors 10 through 12 are currently available for lease, as per Vornado’s website.

A spokeswoman for Vornado did not immediately respond to a request for comment.