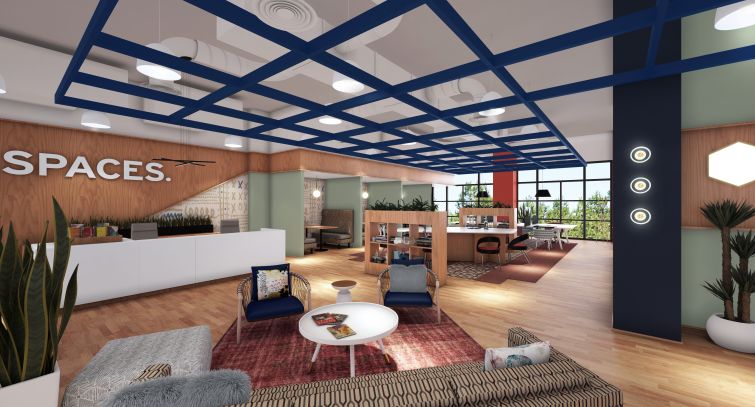 Set to open on June 1, the Calabasas location at 4500 Park Granada Boulevard will provide a 17,000-square-foot working environment that spans across a 20-acre campus and includes gardens and walking trails among other amenities.

Meanwhile, Spaces City National Plaza in Downtown Los Angeles, Spaces El Segundo LAX, Spaces Hollywood and Spaces the Met in Costa Mesa in Orange County will follow and are slated to open between June and July. The organization’s expanded presence throughout Southern California mirrors the company’s global growth strategy, which calls for 200 locations by the end of the year. (Spaces currently has around 100 global locations, including 11 in California.) It also illustrates that the flexible workspace trend is still on fire with Cushman & Wakefield estimating that coworking companies currently occupy or plan to occupy over 3 million square feet of office space collectively across the Los Angeles area, as Commercial Observer previously reported. According to the report, the biggest players in the Greater L.A. area are Regus with 985,554 square feet; WeWork with 928,795 square feet; Premier Business Centers with 462,992; Spaces at 265,715; and Cross Campus accounting for 123,186 square feet.

“We have a really strong business in the whole state of California. Southern California in particular fits our strategy quite nicely,” Michael Berretta, the vice president of network development for IWG, the owner of Spaces (and Regus), told Commercial Observer. “There’s so much growth in Southern California and a diversified base of companies and individuals, from local businesses and entrepreneurs to corporations like Google, IBM and Facebook.”

The Calabasas Spaces location will offer a 2,000-square-foot business club, plus two outdoor courtyards with hammocks and the option to plug in and work outside. Other amenities will include an on-site café, Ping-Pong and foosball tables, and access to a gym with showers. The space is also steps away from a natural creek with acres of walking trails.

The integration of outdoor amenities is key, especially in Southern California, Berretta said, given the overall good weather and client preference. For instance, the Hollywood location will feature a roof deck—as well as screening room—while others will have patios or outside decks.

Berretta said that while Spaces currently occupies between  700,000 and 800,000 square feet of office space in the Greater Los Angeles area, it plans on having over 1 million square feet by year’s end.

In the meantime, when a company becomes a Spaces member, it gains access to more than 3,000 flexible workspace options through the IWG network, which owns Spaces as well as Regus, Berretta explained. Though with notoriously bad L.A. traffic, members may choose to stay put at their primary locale despite the oft-touted availability of freeway access.