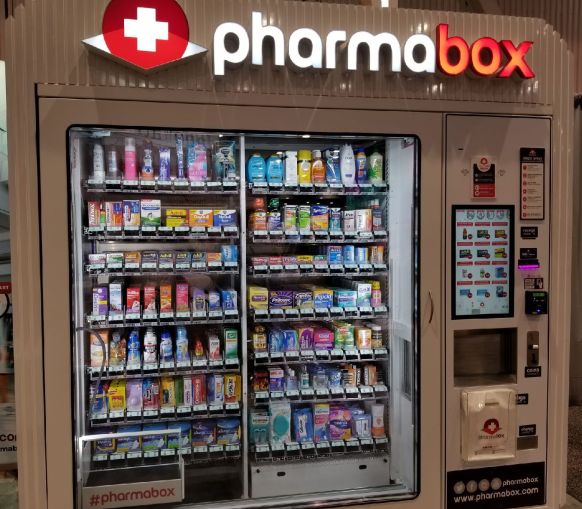 Looking for Mucinex, Advil, tampons or Band-Aids while shopping at Simon Property Group‘s Woodbury Common Premium Outlets mall in Central Valley, N.Y.? Pharmabox has you covered come the first week of June with its pharmacy-in-a-box.

Standing at 92 inches long by 92 inches tall by 42 inches deep, Pharmabox will be situated in front of Tommy Hilfiger, Pharmabox CEO Alejandro Rodriguez told Commercial Observer at the International Conference of Shopping Centers‘ RECon in Las Vegas. It will feature 120 pharmacy products ranging from Dove moisturizing cream to Gillette razors to Robitussin to Aleve to Pepto-Bismol and Purell.

The four-year old company, based in Miami, has 40 operational units, primarily in Orlando and Miami, but is branching out to the New York metro area with the one opening in Woodbury Common, three coming to New Jersey and one heading to Philadelphia. Rodriguez plans to start opening 15 to 20 machines a month following the installation of the New York area ones at the beginning of June.

The Las Vegas Fashion Show machine opened today (with two other Vegas locations opening imminently) and in March three opened side-by-side on the breeze deck of Royal Caribbean‘s Symphony of the Seas ship, which sleeps 6,300 passengers. (One sells personal care over-the-counter drugs, one offers consumer electronics and the other sells pool accessories.)

Pharmabox costs about $40,000 to make and install. The company pays a base rent and then a percentage of sales after the break-even point.

This is an “omni-directional solution,” because it fits in between bricks-and-mortar and online sales, says Tom Hall, vice president of business development at Magex, the manufacturer of the machine.

These machines are already being used by other retailers like Uniqlo, which has 10 airport kiosks (such as in LaGuardia, John F. Kennedy and McCarran Airports) selling four items a piece—a couple of shirts, a sweater and a down vest, Hall said.