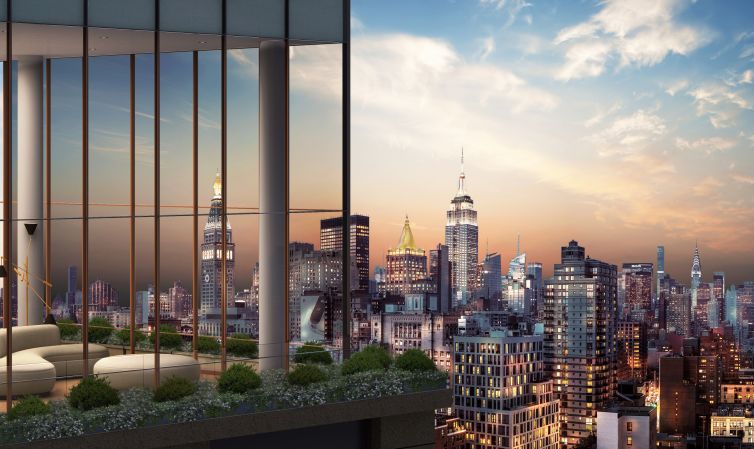 A rendering of the penthouse at Gramercy Tower. Image: Clipper Equity

The financing package—which has a two-year term with two one-year extension options—comprises a senior mortgage plus mezzanine debt, but the exact breakdown couldn’t be ascertained by press time. It retires $345 million in construction debt on the property from July 2015; a $280 million senior loan led by Natixis and $65 million in mezzanine debt provided by Apollo Commercial Real Estate Finance.

“The refinancing of Gramercy Square Condominiums reflects the confidence of the lending community in our projects as the interest rate on a new loan is substantially reduced,” David Bistricer, the chairman and CEO of Clipper Equity, told CO.

As previously reported by CO, the borrowers purchased the former Cabrini Medical Center at 224 to 228 East 20th Street and 209 to 225 East 19th Street in May 2013 for $152 million from S.K.I. Realty, an affiliate of Memorial Sloan Kettering Cancer Center.

When completed, the Woods Bagot-designed Gramercy Square will house 223 luxury condos across four buildings—The Tower, The Prewar, The Boutique and The Modern—and include 20,000 square feet of private outdoor space designed by award-winning landscape architect M.Paul Friedberg & Partners, including a central courtyard, walking paths and a common rooftop terrace with outdoor kitchen.

The development will also be home to The Gramercy Club, an 18,000-square-foot amenities space exclusive to the residents of Gramercy Square. It boasts a 75-foot pool, a hot tub, a sauna, steam rooms, a yoga studio, a gym and a golf simulator.

“The project has had a fantastic response from buyers and we are looking forward to having our first round of owners move into 225 East 19th Street in early summer,” Bistricer said.

Officials at SL Green and Iron Hound declined to comment. Officials at Chetrit Group and Read Property Group could not immediately be reached for comment.