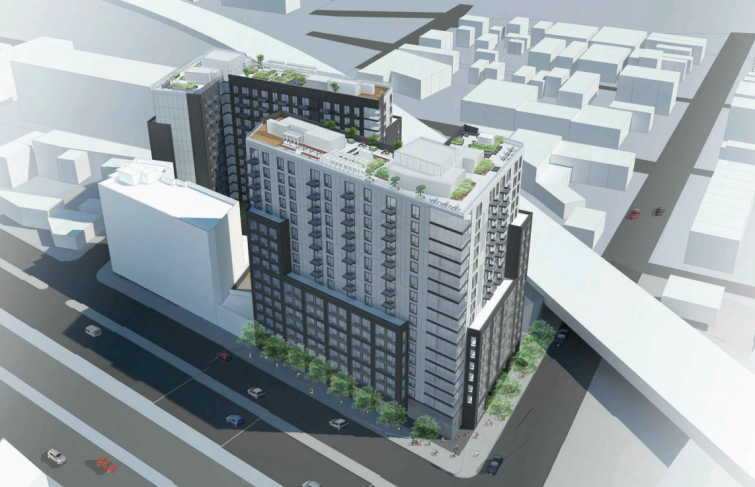 Madison Realty Capital hopes to build a sizable two-tower residential project at 69-02 Queens Boulevard in Woodside, Queens, according to documents filed with the Department of City Planning last week.

If approved, the project would be one of the largest new residential developments to come to the central Queens neighborhood in decades. The firm, led by Joshua Zegen and Brian Shatz, hopes to rezone several industrial parcels to pave the way for a half-million-square-foot complex with 561 apartments—of which 169 would be affordable—and 5,600 square feet of retail. The project would include a pair of towers, one 14 stories and the other 17 stories, along with a 242-space surface parking lot.

Madison Realty is angling to switch the zoning for much of the block between Queens Boulevard, 69th Street, 70th Street and 47th Avenue. The rezoning would change the zoning on the southern half of the site—where only low-rise industrial uses are currently allowed—to match the northern part of the site, where mid-rise residential construction has been permitted since the city rezoned a swath of Maspeth and Woodside in 2006. The developer also hopes to get a special permit to build 40 feet taller than the required, 140-foot-height limit for new residential buildings. The rezoning would force Madison Realty to rent 30 percent of the development’s units to families earning at or below 80 percent of the area median income, as part of the city’s two-year-old Mandatory Inclusionary Housing program.

The Midtown-based firm will likely apply for the 421a tax exemption, now known as Affordable New York.

Securing the rezoning will involve getting approvals from the local community board, the City Planning Commission, the Queens borough president and the area’s newly elected City Council member, Bob Holden. If it doesn’t get the rezoning, Madison Realty could still build a 12-story, 289-unit building with 58 below-market units on the site.

Although the development site spans six parcels, Madison Realty only appears to own two, for which it paid $19.8 million in 2016, according to property records. The properties were formerly home to a gas station, a Mexican restaurant, a florist and an Armenian cultural center. The florist and the cultural center have not yet sold their lots, both of which are industrially zoned. It’s not uncommon for developers to wait to purchase sites until they know a rezoning will make it through the city’s public review process.

The Queens Boulevard complex would be Madison Realty’s first ground-up residential project in Queens. The company has already developed three rental buildings in Clinton Hill, Brooklyn, and has finished condominium projects at One Great Jones Alley in Noho and 78 Irving Place in the Gramercy Park area. A Madison Realty spokesman didn’t immediately respond to a request for comment.