Developers and Experts Warn About Drawbacks of New 421a Program 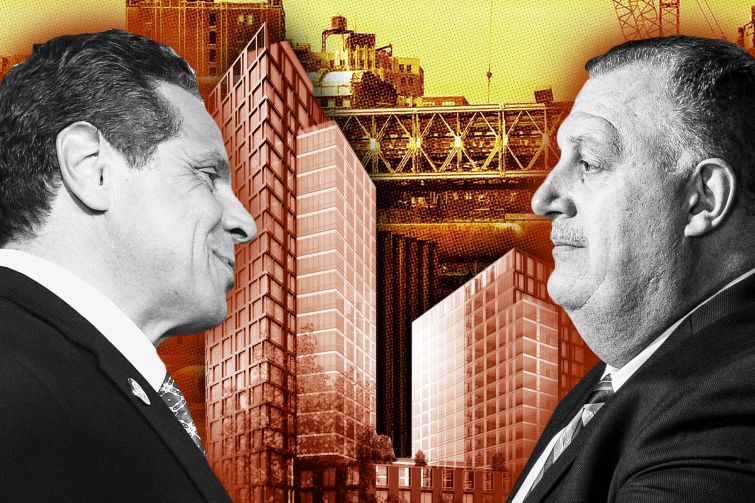 Andrew Cuomo (left) cemented himself as a friend to the Building and Construction Trades Council (headed by Gary LaBarbera, on the right) when he signed off on a new 421a program that required minimum wages for large projects. Photo Illustration by Kaitlyn Flanagan/For Commercial Observer

Last month, when Gov. Andrew Cuomo signed the new 421a bill into law, Gary LaBarbera, the president of the Building and Construction Trades Council of Greater New York, bellowed that Cuomo was “the greatest governor in this country today! Like none other!”

While the revamped version of the program was a victory for both the Real Estate Board of New York and the construction unions, not everyone shares LaBarbera’s enthusiasm for the new 421a.

The revised version of the divisive tax break, now called Affordable New York, is longer, more expensive for taxpayers and filled with ambiguities and caveats that have developers and real estate lawyers scratching their heads.

The governor’s office predicts that the updated version of the exemption will generate 2,500 new units annually. From its inception in 1971 until its expiration in 2015, the old program created 157,100 units, or an average of 3,570 units per year, according the city’s Independent Bugdet Office (IBO). And thanks to new wage requirements and a lengthier exemption, the revamped program will cost New York City $1.2 billion more than the old 421a over the next decade—for a total of $8 billion in foregone tax revenue, the IBO estimated in March.

“421a is by a factor of 10 the most expensive way for the public to finance affordable housing,” said Benjamin Dulchin, who heads the Association for Neighborhood Housing and Development and has railed against the tax program for years. “The public gets a terrible, terrible deal.”

Dulchin explained that the wage floors were only inflating the cost of the tax exemption without creating additional public benefit. “The building trades [groups] get 10 cents of every $10 that REBNY gets out of this,” he said. “I think good working conditions and good wages are a good thing. But that doesn’t mean the public purse should be robbed. Whatever the unions got out of it, it’s making this program even more expensive for the people of New York City.”

Brian Sampson, who represents nonunion construction companies as the head of the Associated Builders and Contractors’ Empire State chapter, disagreed. “In the [421a] agreement, there is no requirement for union construction,” he said. “It established some wage floors, which the industry felt was appropriate. Ultimately it will help individuals earn a better income, and hopefully they’ll reinvest that into their communities where they live.”

The new 421a also creates extra hurdles for developers. Under the old program, owners had to secure the tax break before they put shovels in the ground, and the city issued them a preliminary certificate of eligibility. Now builders won’t get a certificate until the end of construction. They apply for the tax exemption once they finish a project, which could create years of uncertainty and make it harder for developers to secure financing for 421a projects.

“Developers are going into this not knowing if they’re going to be eligible for the abatement,” said Sharon Skolnik, a real estate attorney and partner at Stempel Bennett Claman & Hochberg. “And it will give construction financers pause because they have to underwrite the project without the 421a abatement. They have to come up with ways to feel comfortable with this new program, make sure banks get paid and the project gets built, and they have to ensure the abatement is in place.”

Unlike the old version of the tax break, owners will have to worry about paying property taxes and increases in assessed value during construction.

“You have the potential to be carrying a much higher tax burden for a longer period of time,” said Jason Hershkowitz, a real estate attorney and partner at Seiden & Schein. “You could be talking about many years down the road.”

He added that the city plans to refund developers for property taxes paid during construction after they receive 421a approval.

Another issue with the revamped exemption is that it adds layers of bureaucracy, slowing down New York City’s already-glacial pace for approving and finishing construction projects.

Developers of projects with 300 units or more are expected to pay construction workers prevailing wages—an average of $60 an hour in Manhattan south of 96th Street and $45 an hour along the Brooklyn and Queens waterfronts. In exchange, they get a 35-year tax exemption. Projects that are located outside these areas or have less than 300 units can get 25-year exemptions and aren’t subject to the wage requirements.

The legislation mandates that developers provide a certified payroll of general contractors and subcontractors within 90 days of getting their certificate of occupancy. In order to score the exemption, builders of those projects have to send their payroll records to an independent monitor (typically an accountant), who certifies to the city’s Department of Housing Preservation and Development that the records are correct and the minimum wage standards have been met. Then the payroll goes to the city Comptroller’s Office for an independent review.

If contractors don’t furnish the records on time, shortchange their workers on pay or turn in incorrect records, developers will ultimately face $1,000 a week in fines.

“If there are any deficiencies [in the payroll], they have to pay within a certain period of time, otherwise there will be fine,” Skolnik explained. “Let’s say a sub[contractor] didn’t pay their workers correctly, they have to let the CPA know, and the developer has to pay whatever wasn’t correctly paid.”

The new tax break offers six different options with varying affordability requirements. The most generous ones, Options C and G, allow builders to rent 30 percent of their units at 130 percent of the Area Median Income—as long as the project doesn’t receive any other public subsidy. Projects in Manhattan south of 96th Street also aren’t eligible. Hershkowitz said the city is going to introduce more geographic restrictions for that pair of alternatives, but HPD hasn’t spelled out what it’s going to do yet.

“It’s unclear whether the previous geographic exclusion areas are being carried over or if they’re going to draw a new map,” he explained. “We haven’t gotten an answer from HPD.”

Condo developers also lose under the revised 421a exemption. During the tumultuous year-and-a-half-long negotiation over the new law, the mayor and affordable housing activists demanded that the condo portion of the program be eliminated. Instead, the condo benefit has been restricted to buildings in the outer boroughs with 35 units or less. Plus, each apartment must have an average assessed value of no more than $65,000. That’s a tall order for new construction condos, except for smaller units or developments in relatively inexpensive neighborhoods.

Smaller developers will probably still take advantage of the limited exemption for condos, Skolnik said. “I think anyone that’s building a smaller building is going to want it; it’s better than having no exemption.”

Another caveat is that owners have to maintain the unit as their primary residence for at least five years in order to get the tax break. But it’s not clear how the city will enforce that rule. Skolnik suggested that HPD could have condo owners sign a restrictive covenant to prevent them from selling during that period. The agency didn’t respond to requests for comment by publication time.

Boaz Gilad, who develops moderately priced condo buildings across a broad swath of Brooklyn with his company Brookland Capital, said buyers will be hit hardest by the new, limited version of the tax exemption.

“I think it’s a missed opportunity to help people owning apartments in New York City,” he said. “We have buyers that are paying $1,000 a month in real estate taxes. It makes people think maybe I should live on Long Island or in New Jersey.”

He added that most buyers who took advantage of the old version of the exemption were purchasing apartments in Brooklyn neighborhoods like Bushwick, Crown Heights and Bedford-Stuyvesant, even though oligarchs buying eight-figure penthouses on Billionaires’ Row were what catapulted 421a into the headlines.

“If real estate taxes keep going up, middle class and lower middle class [people] won’t be able to afford those apartments,” he continued, noting that the new 421a clearly favors rental developers. “It seems like the political pressure of big landlords and developers has dictated the program.”