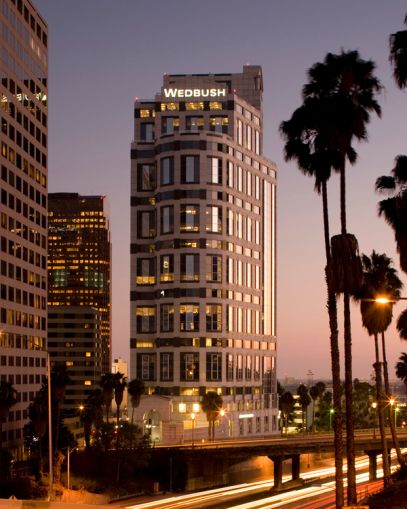 The Wedbush Center in DTLA was among the major office sales in the first quarter of 2018. Photo: Wedbush

The impact of tech, media and entertainment sectors in Los Angeles shows no signs of abating, with tenants from the fast-growing fields, along with legal and bioscience tenants, driving office market growth in some key submarkets, according to findings from CBRE’s recently released first-quarter 2018 report on the Greater Los Angeles office sector. Large deals helped offset major office move-outs, though those vacancies led to the market’s overall meager 29,043 square feet of positive net absorption, and were reflected in large swings in many submarkets.

Large media, tech and entertainment users assumed 220,581 square feet of office space, with the majority concentrated in Culver City (183,497 square feet), West LA and the Hollywood/Wilshire Corridor accounting for the remainder. The growth was counteracted by Snap Inc.’s decision to put 163,000 square feet of its office space up for sublease in Venice.

El Segundo, where The Los Angeles Times will be relocating this summer as previously reported by Commercial Observer, was a major driver for the uptick with a $0.77 year-over-year increase and 56 percent jump since 2013.

Overall there was 2.1 million square feet of office space under construction in Greater Los Angeles, including the repositioning of the Westside Pavilion shopping mall into a creative office-retail mixed-use redevelopment through a partnership with Macerich and Hudson Pacific Properties, as previously reported by CO.

Investment, however, dropped dramatically in the first quarter of this year to $1.41 billion—its lowest office sales volume in five years, according to Real Capital Analytics. CBRE reported that few large buildings traded, inventory dwindled and foreign buyers pulled back on investing.

“Overall office investment activity has moderated from a cyclical peak in 2016 simply because it’s a mature cycle and there is a growing scarcity in the supply of quality core and even value-add opportunities,” George Entis, a senior research analyst at CBRE, told CO.

Investment activity slowed in Downtown LA in the last few quarters, despite major sales the first part of this year, including the Wedbush Center, which was acquired by Cerberus Capital from a joint venture of Lincoln and PCCP for $196 million, or $415 per square foot.

Entis attributed the slowdown in DTLA to foreign investors’ predilection for trophy properties, which “are drying up in downtown,” leading them to alternative regions for investment. However, he said such investment is a small fraction of overall investment activity, with only 16.3 percent of capital coming for a foreign source last year. Furthermore, he said while investment volumes are starting to trend down, activity will remain elevated as “the world is awash with global capital, which tends to focus disproportionally on major gateway markets,” including Los Angeles.