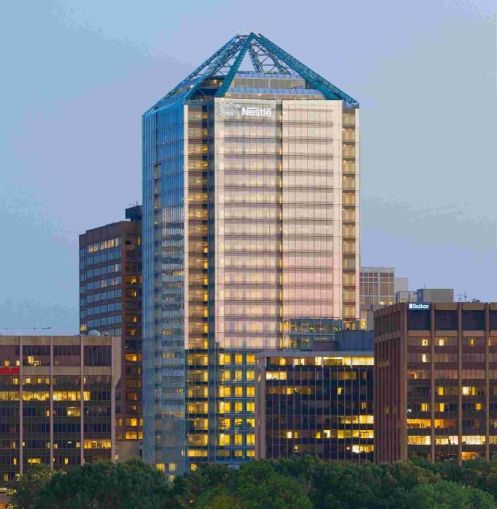 The news comes a year after Nestlé, Gerber’s parent company, announced its move from Glendale, Calif. to a 35-story office tower at 1812 North Moore Street in Rosslyn, three miles from Washington D.C. The two companies will share 250,000 square feet within the 537,000-square-foot building, developed by Monday Properties in 2013.

“Closer proximity to Nestlé USA’s new headquarters in Arlington will provide efficiencies that will be reinvested in our people, products and production to fuel growth,” said Bill Partyka, the president and CEO of Gerber, in a press release from the governor’s office. “Northern Virginia also offers a great quality of life for our employees and provides access to strong talent for our current and future needs.” Gerber is expected to bring 150 jobs to the region.

Nestlé was represented in the deal to anchor the tower by CBRE’s Lou Christopher, R. Todd Doney, Jordan Brainard and Brian Wood, according to a spokeswoman for CBRE. Tim Helmig, Austin Freeman and John Wharton from Monday Properties along with JLL’s Evan Behr and Doug Mueller represented the landlord. The CBRE spokeswoman and representatives from Monday Properties and JLL would not disclose the terms of the lease.

The early childhood nutrition company will invest $5 million in the move from New Jersey. Northam approved a $862,500 from the commonwealth’s Opportunity Fund to assist Arlington County with the project. Gerber is also be eligible to receive a Major Business Facility Job Tax Credit—the potential dollar amount was not included in the release.