SpaceX Launches Into Bigger Footprint at Port of Los Angeles 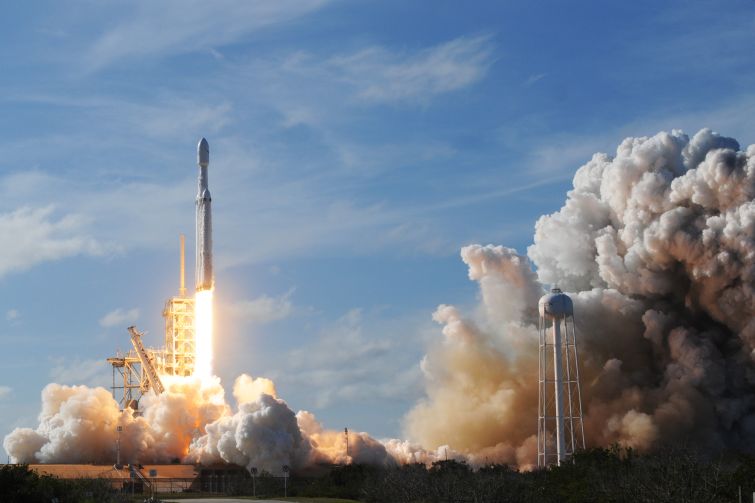 The SpaceX Falcon Heavy launches from Pad 39A at the Kennedy Space Center in Florida, on February 6, 2018, on its demonstration mission. JIM WATSON/AFP/Getty Images

SpaceX is looking to expand its operations in Los Angeles by taking up additional industrial space at the Port of Los Angeles, according to plans approved by the Board of Harbor Commissioners on March 15, as reported by Ars Technica after the news was shared on social news site Reddit.

The approval clears the way for SpaceX, which has its primary manufacturing facilities in Hawthorne in the South Bay of Los Angeles, to begin lease negotiations for Berth 240, an abandoned lot located off South Seaside Avenue on the San Pedro side of the greater Port of Los Angeles.

SpaceX is Elon Musk’s aerospace company, founded in 2002 to reduce the cost of space travel with the goal of enabling people to live on other planets.

Formal documents indicate the project seeks a 10-year lease, with options for up to two 10-year lease extensions or renewals, and would involve construction and operation of a facility at Berth 240. In addition to “research and development of transportation vessels” and general manufacturing procedures such as welding, painting and assembly operations, the lease would also accommodate “recovery operations” undertaken by SpaceX “to bring to shore vehicles returning from space that are retrieved by an autonomous drone ship offshore.”

SpaceX already leases 8.1 acres of space in the East channel of the port, according to Port of Los Angeles spokesman, Phillip Sanfield, which it uses when collecting vehicles and equipment returning from space.

While Sanfield could not comment on the specifics of SpaceX’s plans, he told Commercial Observer the Port of Los Angeles was in lease negotiations with the space exploration company.

For comparison sake, SpaceX’s location in Hawthorne occupies around 10 to 15 acres of urban real estate. In comparison, Berth 240 has a total leasable area of 18 acres, according to the official planning application filed by a limited liability corporation called WW Marine Composites, an apparent subsidiary of SpaceX.

Eva Behrend, spokeswoman for SpaceX, would only confirm to Commercial Observer that “SpaceX is in preliminary discussions with the Port of LA about the potential of leasing additional land for operations.”

While official word is scant, details from the approved plan indicate the facility may be used to manufacture the company’s proposed Big Falcon Rockets, which Musk has described as interplanetary vessels that have the capacity to reach Mars.

According to plans, the transportation vessels produced there would be created in a new 203,450-square-foot structure with nearby 12,000-gallon tanks for storage of argon, helium, nitrogen, and oxygen.

Furthermore, “completed vessels would be too large for transportation by road, necessitating that the facility be adjacent to the water” which would then be transferred from the building onto a supply barge at the wharf to be transported to testing or delivery destinations.

A source familiar with the deal told CO it’s likely SpaceX will consolidate their port locations once a lease agreement is reached.