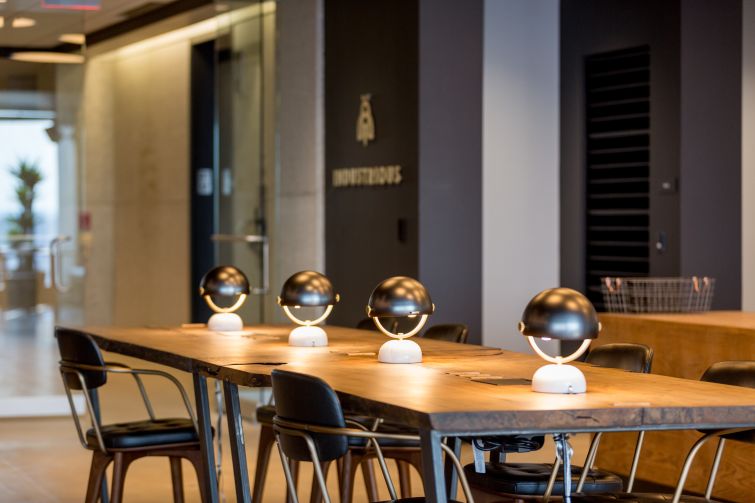 Rapidly growing Brooklyn-based flexible workspace provider Industrious, which has attracted members from Hyatt, Instacart, Chipotle, Fullscreen, Mashable and Pivotal, is about to get even bigger.

After tripling the number of its locations in the U.S. to 35 over the past three years, Industrious has completed its latest fundraising round and pulled in $80 million in Series C funding co-led by Los Angeles-based Fifth Wall Ventures and Riverwood Capital, according to an Industrious news release today.

The company has now raised a total of $142 million since its founding in 2013, according to a spokeswoman. It plans to further its expansion by adding between 50 to 60 more locations this year. Also Industrious is projecting its revenue growth will triple this year, according to Jamie Hodari, a co-founder and the CEO of Industrious. He also said that in 2018, the company plans to launch an app that will help connect tenants to events. He declined to go into further detail about the product.

“Our network is growing very quickly and that is a capital intensive proposition,” Hodari told Commercial Observer. “We have to be able to serve our customers where they are, wherever that is across the country.”

Fifth Wall, a venture capital firm that invests in burgeoning real estate companies, is backed by major property owners such as Hines, mall-operator Macerich, Prologis and Rudin Management Company. (Industrious is not the first coworking provider that Fifth Wall has invested in, but it is the first that has been publicly announced.) It has already invested in VTS, Appear Here, WiredScore and Enertiv, as CO reported first in January.

The company chose to invest in Industrious because of its ability to attract Fortune 500 companies to its model.

Industrious does not create flashy spaces designed with startups in mind, but implements sophisticated designs with actual offices—and a handful of coworking desks—at its locations.

Wallace added that Fifth Wall also selected Industrious because he believes the office space provider partners more with landlords than do its competitors, based on the structure of the lease agreements it signs.

The Fifth Wall co-founder declined to elaborate, but said Industrious is different than say a WeWork, which signs a lease and then fills its spaces with members whose collective fees work out to much more than the price of the original lease. In WeWork’s case, the coworking giant receives more upside than the landlord does for the space. (A spokesman for WeWork declined to comment.)

“I think that landlords have grown increasingly cautious to coworking players, including WeWork,” Wallace said. “What [Fifth Wall’s investors] were looking for was a coworking partner to deploy across their national footprint.”

Riverwood Capital also led a $37 million Series B funding round in Industrious in 2016. The investment firm was pleased with the office provider’s growth.

“Since our first investment in Industrious in 2016, we have seen the company grow exponentially and deliver a unique experience for its members as they build their own modern workspace within an Industrious [location],” Francisco Alvarez Demalde, a co-founder and general partner of Riverwood Capital, said in prepared remarks. “We believe Industrious will play an important role in shaping the future of how we work, and are excited to continue being a part of the Industrious journey.”