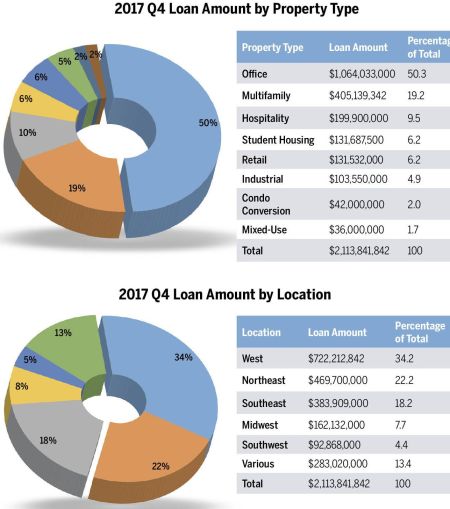 ACORE Capital originated 30 loans totaling $2.1 billion in loans in the fourth quarter of 2017, making it the busiest quarter in the debt fund’s three-year history. Warren de Haan, ACORE’s head of originations and one of its four co-founders, gave Commercial Observer the exclusive skinny on what drove the surge in activity and which assets kept them busiest.

Rumblings of the surge began stirring by early summer 2017, de Haan said: “We started seeing an increasing number of borrower requests and better product. So, great real estate with 25 to 30 percent equity in the deal and a story to it—that’s exactly what we do,” de Haan said.

The demand was partly driven by borrowers’ comfort with both the capital markets and the return profile of commercial real estate, de Haan said, as well as ACORE expanding its product offering to address those borrowers’ various requests.

“We have the flexibility to originate loans for our balance sheet [ranging] from lower-leverage, bank-like pricing to higher leverage loans on large, complex transitional commercial real estate transactions across all property types—as well as ground-up construction on a selective basis.”

Multifamily assets took the second-place spot at $405 million, or 19 percent, of the total. This was slightly unexpected, de Haan said, but new supply in multifamily construction has resulted in increased demand for financing.

“Housing fundamentals have been such that we strongly believe in the long-term trajectory of renters, and the demand from millennials continues to grow. A number of projects are coming to us 40 to 60 percent leased, so while it’s too early to go to Fannie Mae or Freddie Mac [for permanent financing], [the borrower] is coming off a construction loan and needs a bridge loan. We found a very good pocket of opportunity to go and do a bunch of those [loans].”

ACORE’s largest student housing loan of the quarter was a $131.7 first mortgage for the ground-up construction of The Graduate—a 19-story student housing building in San Jose, Calif.

Like every other lender in the industry, ACORE was up against plenty of competition “When we’re competing, we’re competing with two guys, but they’re always different guys. Because of our scale we’re omnipresent—we’re always showing up.”

That said, “The better our competitors are, the better the experience is in the alternative lending space and the better it is for all of us,” de Haan said.

Roughly 34 percent of ACORE’s fourth quarter deals were on the West Coast ($722 million). The Northeast followed with $470 million in transactions (or 22 percent), and the Southeast closely behind it with $380 million (or 18 percent).

ACORE made loans to a number of new clients last quarter, including big institutional names as well as entrepreneurial borrowers newly entering the industry.

“We love backing the people that are taking risks but are smart, good credit people. We’ve been very successful at supporting newer entrants in their new endeavors as entrepreneurs,” de Haan said. “We provide higher leverage for them while they get their equity lined up and we can show up for them on a very short [closing timeline] so they can be competitive when they are buying something.”

In addition to its lending surge, ACORE increased the depth of its asset management team to account for more transitional assets last year, which positions it well for a busy 2018, de Haan said: “We have the capital base, the reputation, the people, the scale, the cost of capital and the products to ensure a solid 2018.”