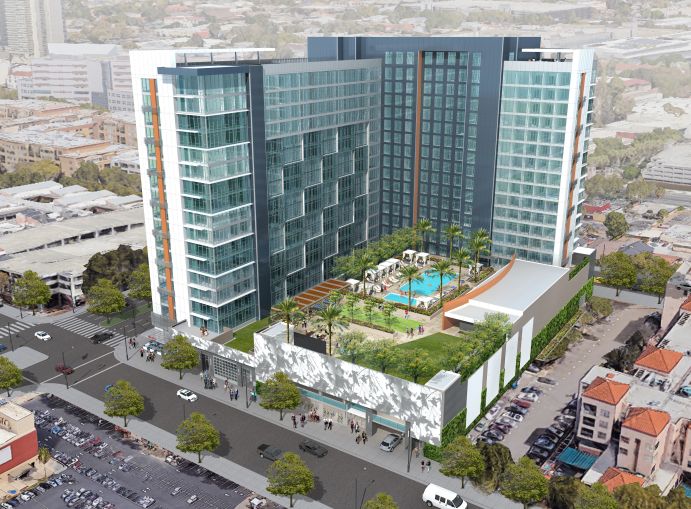 A rendering of The Graduate. Photo Credit: AMCAL Swenson.

The loan, which has a 60-month term and closed on Dec. 8, was made to AMCAL Swenson, a joint venture of San Jose-based development firm Swenson and Los Angeles-based residential developer AMCAL Equities. The financing was arranged by Alison Company.

The Class-A, L-shaped property at 90 East San Carlos Street will sit on a 1.45-acre site located one block from the main entrance to San Jose State University. In addition to housing 1,039 students across 260 furnished apartments in its top 17 floors, the building will include 14,750 square feet of retail space, a four-level parking garage, an amenity deck and a pool.

“This project required a fairly large loan and the banks that we would normally go to—because of all of the banking regulations, weren’t comfortable with a single loan of this size without having to syndicate it out. Additionally, those banks’ maximum leverage is around 60 to 65 percent,” Vaz said, of why he selected ACORE. “With ACORE, we achieved 70 percent leverage and it was non-recourse. We’d certainly work with them again on any future project.”

The San Jose State University campus has a growing need for student housing and The Graduate addresses that need, Vaz said. “The campus is very constrained because its in Downtown San Jose and really doesn’t have room to grow sideways, it can only grow vertically.  So, because of the increase in student housing demand we thought this was a great opportunity.”

Further, there is a lack of housing at all price levels throughout the Bay Area, Vaz said, and trying to achieve financial feasibility to build a new project is becoming increasingly difficult. “With The Graduate, if we were to try to develop it today we would have to pay around $4 million more just in city fees,” he said. “The reason we were able to get fees reduced is that the mayor of San Jose has a goal to develop 10,000 new housing units. As an incentive to develop those units in the Downtown area, the city offered incentives to developers to build the housing that the city of San Jose wants built. This project fit nicely with the city’s goals.”

“The Graduate will serve as a significant bridge between campus and the SoFA District as well as the surrounding urban amenities of downtown,” Case Swenson, the president of Swenson, said in an announcement at the time of the project’s groundbreaking in October. Its construction is expected to be completed in 2020.

It’s been a busy year for ACORE Capital with the nonbank lender closing deals from coast to coast. In September, it closed a $63 million loan to Dr. Kiran Patel for the acquisition and renovation of Cheyenne Mountain Resort in Colorado Springs, Colo., as well as a $73.4 million financing for the redevelopment of 163 Varick Street in New York City. A month earlier, it provided a $121 million loan—which included a senior loan and a mezzanine portion—to developer Sterling Bay for its purchase of a vacant building in Chicago’s West Loop area.

Update: This story was updated to include comments from Percy Vaz, the chief executive officer of AMCAL.