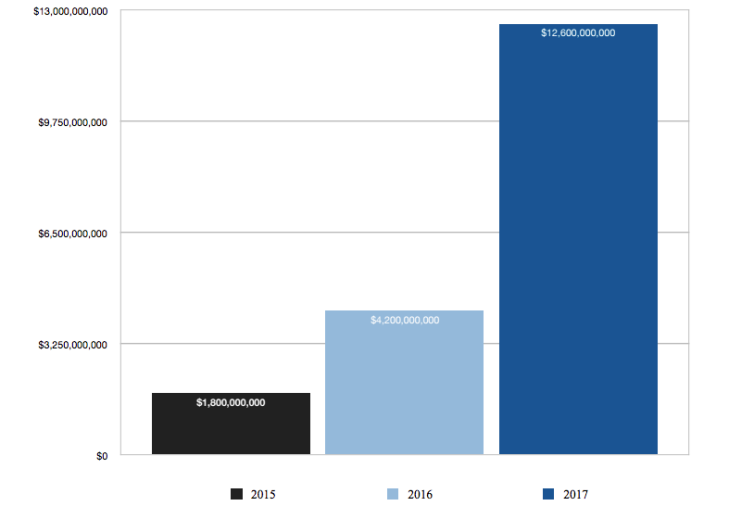 Global venture capital investment in the real estate technology sector swelled to roughly $12.6 billion in 2017 despite a notable drop in the number of investment deals in the proptech industry, according to a new report from real estate tech research and marketing agency Re:Tech.

The amount of venture capital money invested in real estate tech last year was triple the $4.2 billion that flooded companies’ coffers in 2016, with the 2017 numbers boosted significantly by SoftBank’s enormous $4.4 billion investment in coworking giant WeWork and the $550 million raised by residential brokerage Compass (including a $450 million capital infusion from SoftBank).

Those deals, both of which were secured in the fourth quarter of last year, contributed to a frothy market that has seen venture capital investment in the proptech sector catapult from merely $1.8 billion 2015, according to Re:Tech. Excluding WeWork and Compass, real estate tech firms raised around $7.65 billion in 2017—including a $230 million debt raise by Arizona-based home buyer OfferPad and the $200 million raised by Miami-based, Airbnb– and Brookfield Property Partners-backed residential developer Niido.

“There’s a lot of dry powder in the [real estate tech] market,” Re:Tech founder Ashkan Zandieh said of the influx in venture capital funding in the sector. “There are historically high valuation levels, and you’re seeing similar companies competing for the same transactions.”

Despite recent indications from real estate tech organization MetaProp NYC’s Global PropTech Confidence Index that proptech startups are having a harder time securing early round funding, Re:Tech noted that “early stage companies”—classified as those on Series A or B fundraising rounds—raised more than $480 million across 218 deals in 2017.

In terms of the overall number of investment transactions, Re:Tech noted a “growing disconnect between deal and dollar volume” with the 347 transactions tracked in 2017 constituting a roughly 7 percent decline from the previous year. The report added, however, that “on a three-year spread” the number of funding deals has grown by more than 5 percent since 2015.

While it’s uncertain whether this year will match the $12.6 billion raised in 2017, Zandieh expressed optimism for the proptech sector in 2018—noting that “many venture capital firms are flush with cash,” which should result “in a healthy 2018.”

Mike Sroka, a co-founder and CEO of deal management platform Dealpath, said he largely agreed with the Re:Tech report’s findings, particularly noting “a huge wave of investment and development in real estate software services” in the past three to four years.

Sroka cited “a lot of new capital coming into the space” from a diverse array of investors, especially heightened investment from major venture capital firms that weren’t as focused in the proptech sector several years ago. “There’s a lot of activity from the big, traditional venture capital firms, and part of that is the recognition that these companies are achieving scale now.”

He added that he expects 2018 “to bring continued strong interest and access to traditional venture capital” with “a disproportionate amount of dollars” going to more established, “mid- and later-stage companies.”

Connell McGill, co-founder and CEO of building data software firm Enertiv, noted more heightened interest in the sector from “members of family-owned real estate portfolios” that are investing in real estate tech or launching their own venture capital investment arms targeting the industry—such as the Rudin family’s Rudin Ventures.

“You have all these families where real estate is their core business, and now there are these new technologies that are aiming to disrupt their space or make their businesses more profitable,” McGill said. “These are families that have a significant amount of resources that can be invested [in real estate tech].”

McGill added that, in his own conversations with venture capital investors, “I’m hearing that every generalist VC now has real estate tech circled on their whiteboard”—with such investors constantly on the lookout for early stage ventures targeting new or emerging segments of the industry.

Zach Aarons, a co-founder and partner at MetaProp NYC, said the success of WeWork, Compass and OfferPad indicates how venture capital investors are increasingly drawn to “traditional real estate companies that are tech-enabled,” rather than tech companies with products catering to the real estate industry.

Aarons said that the evolving nature of the proptech sector may precipitate an evolving profile of investor, as many new startups seeking funding “don’t fit the traditional VC paradigm or the real estate paradigm” when it comes to attracting capital. He added that such companies “would be better off” with funding from a different class of investors that are “more risk-averse than venture capital but more risk-tolerant than real estate investors.”